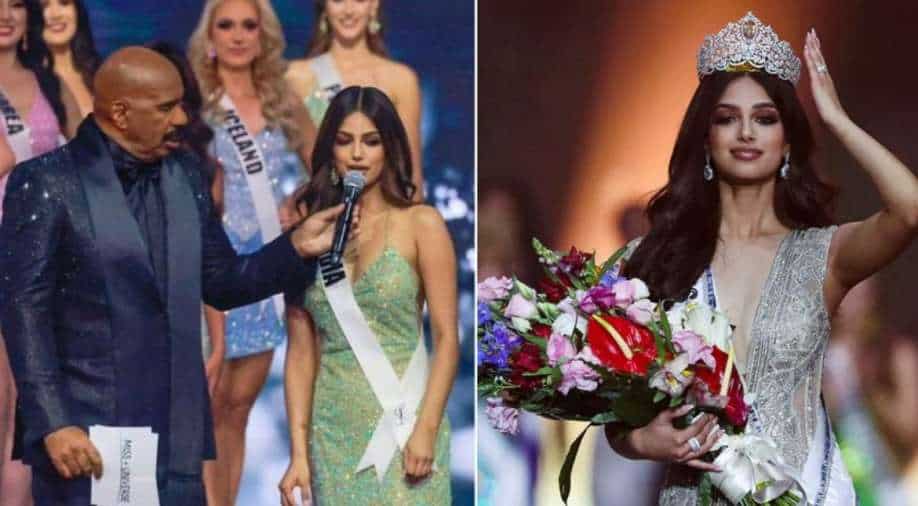 Actor-host Steve Harvey has done it again. The comedian hosted Miss Universe 2021 pageant on Sunday night and one of his interactions with Miss India Harnaaz Sandhu has been severely criticised online.

Harvey was slammed for asking Miss Universe winner Sandhu to impersonate an animal instead of speaking about her accomplishments like other contestants.

Addressing Sandhum who belongs to Chandigarh, Harvey said, "I hear you do some pretty good animal impersonations. Let's hear your best one."

"Oh my god, Steve, I was not expecting to do this on the world stage,” Sandhu replied looking visibly shocked. She added, "I have to do this, I have no other option."

Sandhu then managed a couple of loud 'meow's in front of a rather stunned audience before Harvey took over the mic again and continued to talk to other finalists about their accomplishments.

Sandhu, an actor by profession, has been a staunch advocate of women's rights and empowerment in India and has been working with her gynaecologist mother to spread awareness about women's hygiene at health camps.  Sandhu has appeared in Punjabi-language films and is currently enrolled for a Masters degree in public administration.
Several on social media took offence to Harvey's unusual request and called it 'culturally insensitive' and 'completely inappropriate.'

OMG Miss India meowing at Steve Harvey is not what I was expecting to see tonight. Pretty sure the Miss Universe organization could have asked a better question… very frustrating but she was nothing if not confident.

How long is Steve Harvey’s Miss Universe host contract? Asking for myself. Can we get someone else please?! pic.twitter.com/tz4cRHgHUb

Steven Harvey has hosted Miss Universe several times in the past. He also drew flak for confusing Paraguay and Portugal while announcing the finalists.

Steve Harvey has been infamous for such gaffes. In the 2015 edition of the competition when Harvey announced first runner up Miss Colombia as the winner when in reality it was Miss Philippines.

Is it just me or is Steve Harvey continually inappropriate and continues to make embarassing gaffes. Asking Miss India to make Cat sounds, then (again) mixing up country names - this time calling Miss Paraguay, Miss Portugal. I think he should move on #MissUniverse2021

The event took place in Eilat, Israel, on 12 December (Sunday). Sandhu became the first Indian to win the pageant in 21 years. Earlier only two other Miss Indias have won the Miss Universe title - Lara Dutta in 2000 and Sushmita Sen in 1994. 'So proud of you!' Sushmita Sen to Miss Universe 2021 Harnaaz Sandhu

Before Harnaaz Sandhu, take a look at other Indian Miss Universe titleholders