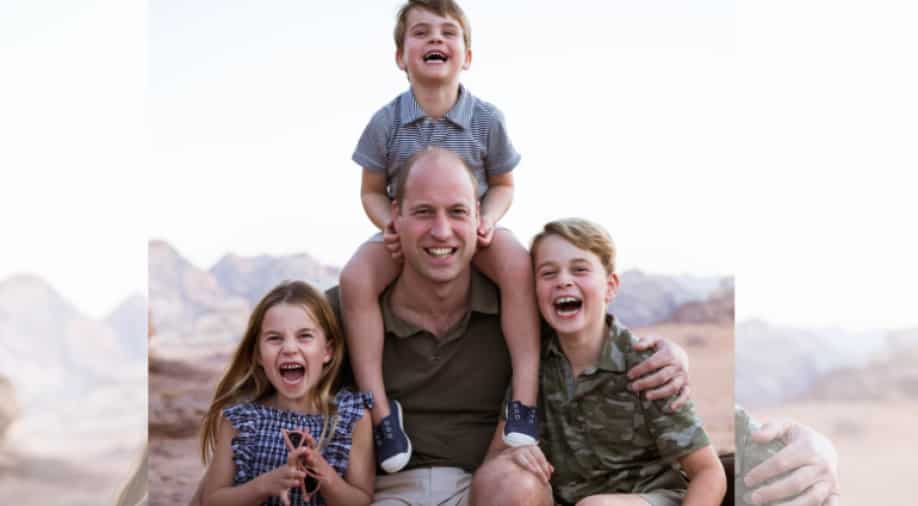 The entire world is celebrating father's day today and marking the special occasion, a new & happy photograph of Prince William and his adorable three kids was released.

On Saturday, Kensington Palace released a new photo taken during their family vacation to Jordan last year, featuring the Duke of Cambridge with Princess Charlotte and Prince George and his youngest and notorious child Prince Louis.

In the picture, Charlotte and George are sitting beside him and are laughing, while Loius is on his dad's shoulder with the biggest smile on his face.
"Happy Father's Day to fathers and grandfathers across the world today!" they wrote in the caption.

In the photo, all of them are dressed casually.

Wishing a Happy Father’s Day to fathers and grandfathers across the world today! pic.twitter.com/dNPJqvjHDy

The family used another image for the 2021 Christmas card from the same trip but that included Kate also and was captured in different background.

The Royal kids are rarely seen in the public and their photographs are released on special occasion only.

However, recently, during Queen Elizabeth's Jubilee celebration marking 70 years on the throne, all the three kids were part of the event and stepped out for the four-day-long celebration.

Among three of them, Prince Louis gained all the attention for his cute and goofy expressions and all the notorious activities he did during the event that made him an internet sensation and everyone's favourite Royal child.