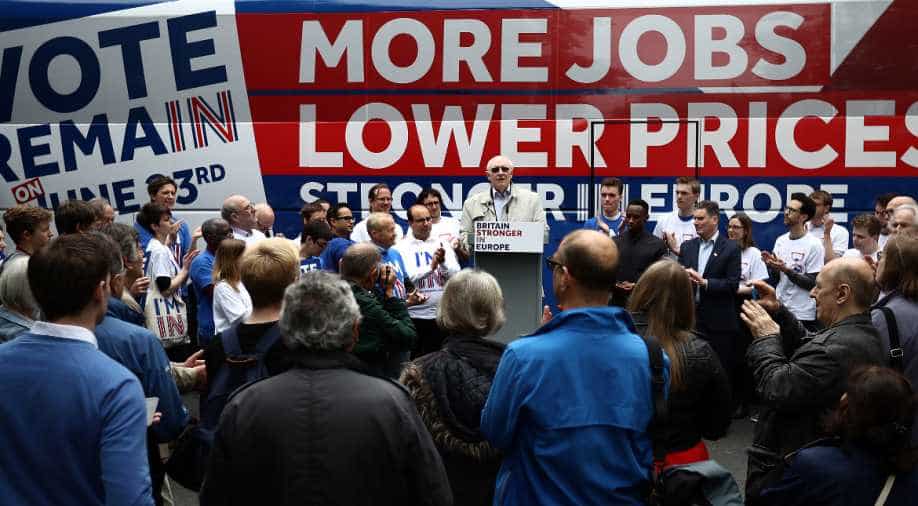 Major investment banks had warned they could move thousands of jobs elsewhere if Britain opted out of the EU. Photograph:( Getty )

Follow Us
Britain’s 2.2 million financial industry workers face years of uncertainty and the risk of thousands of job cuts after the country voted to quit the European Union, leaving question marks over London's status as Europe's premier financial centre.

The ‘Vote Leave’ campaign fronted by a slew of Conservative lawmakers and financial industry veterans claimed victory over its ‘Britain Stronger in Europe’ rival, after 374 of a total 382 counting areas declared majority support for their plan to leave the 28-nation club by 0507 GMT.

The final official result is expected around 0600 GMT.

Bankers’ early confidence that Britain would remain within the European Union quickly evaporated after early vote counts suggested the "leave" camp had the upper hand, sending Sterling plummeting to a thirty-year low and heart-rates racing on trading floors from London to Hong Kong.

A leave vote means the future of Britain's financial services industry is now hanging in the balance.

All depends on the divorce between Europe and Britain, the latter's ability to retain access to the European free market, and cope with the volatility that has seen Sterling nosedive against major global currencies.

Mood in the restaurants and coffee shops in the high-rise banking hub of Canary Wharf, home to JPMorgan, Citi, HSBC and Barclays, was sober and contemplative, with job security fears rising to levels unseen since the 2008 financial crisis.

Major investment banks have already warned they could move thousands of jobs elsewhere if Britain opts out of the EU, while the European Central Bank has signalled it could force euro trading out of London, the world's largest foreign exchange market.
Wall Street bank Morgan Stanley could move around 1,000 of its roughly 6,000 employees currently in Britain on to the Continent if the country votes to leave the EU, a person familiar with the matter has told Reuters.

Jamie Dimon, CEO of rival JPMorgan told staffers his bank "may have no choice" but to overhaul its UK business model, casting a pall over its 16,000 strong workforce.

But for now, sources at banks said memos emailed internally to rattled employees advised them to think about clients first.

"I’ve convened a big team meeting at 0800 GMT as the juniors are freaking out. I will tell them to focus on their job and wait for the volatility to pass but the reality is much, much starker, we'll have a crash and big layoffs," a senior investment banker at a U.S. bank told Reuters.
"It's an act of national self-harm," he added.

CARNAGE ON MARKETS
Months of bitter campaigning has left the industry - which earned the nation 190 billion pounds in 2014 - deeply divided, with investment banks and insurers pitted against many fund managers and brokers who wanted a Brexit.

"This is the biggest vote in my lifetime. Black Wednesday and the impact of Lehman Brothers collapsing - these other big events don't even compare in magnitude to this," said Mark Boleat, Chairman of the City of London’s Policy and Resources Committee.

"We are just beginning to think through what will have to happen legally and it is massive, absolutely massive," he told Reuters.

Reflecting the uncertainty that will hit the financial services sector, Hong Kong-listed shares of HSBC and Standard Chartered fell more than 10 per cent, while other UK banks are expected to post sharp declines when they start trading in London.

All the major international and British banks in London had traders either working through the night or on call. Bankers in New York were also burning the midnight oil with special numbers laid out for clients to call, foreign exchange desks fully staffed and senior management keeping a fretful eye on screens.

"Leave’s victory has delivered one of the biggest market shocks of all time ... Panic may not be too strong a word," Joe Rundle, Head of Trading at ETX Capital said.

Many financial firms rely on the EU’s ‘passporting’ regime to sell their services across all of the bloc while basing the majority of their staff and operations in London.

European government officials said UK-based firms could lose these privileges in the event of a Brexit, a move that would force them to shift some of their operations to the likes of Frankfurt, Paris or Dublin if they wanted to serve EU clients.

WHAT NEXT?
The Financial Conduct Authority said it would not comment about any immediate action it might take until after the referendum result has been formally announced. The Bank of England's Prudential Regulation Authority said it had no comment for the time being.

For investment bankers, a Brexit vote is more than just about volatile prices on a screen but also about where they may end up working and living.

"I will be ok because I've had a long career and I have savings and assets," the senior banker said.

"People just starting out, people in much more precarious situations, will lose out from Brexit."

But some commentators said the volatility would be temporary and would soon subside when international investors drawn by a fall in sterling began to scour financial markets for bargains.

"Certainly, some international investors could find the UK less attractive but history shows us others are positively attracted to economies that get a devaluation boost," said Colin McLean, Managing Director at SVM Asset Management.

"There may even be more takeover activity from overseas firms looking for bargains on the London stock market," he said.

Disappointed supporters of the EU project on mainland Europe said Britain would struggle to keep the same market freedoms that have attracted more than 250 foreign lenders to its shores and turned financial services into Britain's biggest export.

"If Britain guarantees to implement all the rules, then Europe will unlikely punish London," said European Parliament member Sven Giegold, a member of the German Green Party.

"But the will of the citizens was exactly to get rid of that dependence. That is the irony because you can't do both. If you want to keep your market open, you have to accept all the rules. Without that, Europe would be foolish to extend privileges to the UK and the City of London," he said.