Who are the Ukrainians? What you should know about the nation facing war 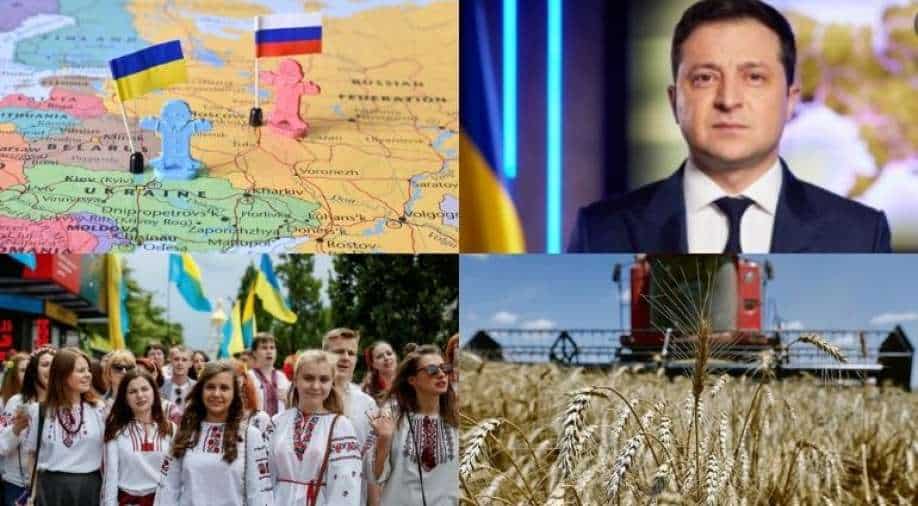 Ukraine is a developing country, with a Human Development Index ranking of 74th.It has a high poverty rate as well as a high level of corruption.Ukraine, on the other hand, is one of the world's greatest grain exporters due to its vast and fertile farmlands. Photograph:( WION )

Europe's second largest country, Ukraine is a land of wide, fertile agricultural plains, with large pockets of heavy industry in the east.

Ukrainians are an ethnic group of East Slavs who originated in Ukraine.

They are Europe's seventh-largest country and the East Slavs' second-largest after the Russians.

According to Ukraine's Constitution, the phrase "Ukrainians" refers to all of the country's citizens.

Following the dissolution of the Soviet Union in 1991, Ukraine has alternated between pursuing closer integration with Western Europe and being lured into the orbit of Russia, which regards a Western-leaning Ukraine as a threat to its interests.

Ukraine, Europe's second-largest country, is a place of wide, fertile agricultural plains in the east, with big concentrations of heavy industry.

Ukraine is one of the world's largest exporters of grains - wheat, corn, and barley.

Here are five facts about the country that has long been disputed by great empires.

Ukraine literally means "on the edge".

Modern-day Russia and Ukraine both trace their roots to the medieval state of Kievan Rus, which at its height stretched from the Black Sea to the Baltic.

Indeed Russian President Vladimir Putin has written a 5,000-word essay trying to prove that "Russians and Ukrainians are one people".

But Ukrainians speak their own language and much of what is now Ukraine was part of the Polish-Lithuanian Commonwealth, with other areas controlled by the Cossacks and Crimean Tatars up to the end of the 18th century.

It then became part of the Tsarist Russian empire although some western regions belonged to the Austro-Hungarian Empire.

Ukraine later became part of the Soviet Union, suffering during a devastating famine known as the Holodomor caused by Joseph Stalin's policies that killed up to five million people there.

Tensions between Kiev and Moscow flared again in the decades following the break-up of the Soviet Union in 1991 when an overwhelming majority of Ukraine's people voted for independence.

After a pro-Western popular uprising led to Russian-backed president Viktor Yanukovych fleeing in 2014, Moscow annexed the Crimean peninsula and supported separatists in the east of Ukraine.

The conflict has claimed around 14,000 lives.

The annexation of Crimea and the loss of the industrial Donbas in 2014 threw the Ukrainian economy into freefall. GDP dropped by more than six percent, and the following year it fell nearly a tenth, with inflation hitting more than 40 percent.

The economy has since recovered somewhat but the country of 45 million people remains one of the poorest in Europe.

The country relies on transit fees for Russian gas towards Europe but new Moscow energy pipelines like Nord Stream bypass it.

During disputes in 2006 and 2009, Moscow cut supplies to Ukraine during the winter, sparking knock-on shortages in Europe.

Many hundreds died though the exact figure remains disputed. Soviet authorities initially tried to cover up the disaster.

Eventually 350,000 people were evacuated from within a 30-kilometre (19-mile) radius around the plant, an exclusion zone that remains uninhabited, apart from some elderly residents who returned despite an official ban.

Humans will only be safe to live there again in 24,000 years.

In recent years the site has become a tourist attraction, with the success of HBO's mini-series "Chernobyl".

While some in the West think of borscht as synonymous with Russian cuisine, Ukraine claims the beetroot-based soup with cabbage as part of its national heritage dating back to the 14th century.

A number of other dishes are contested by Russia and Ukraine, including Chicken Kiev.