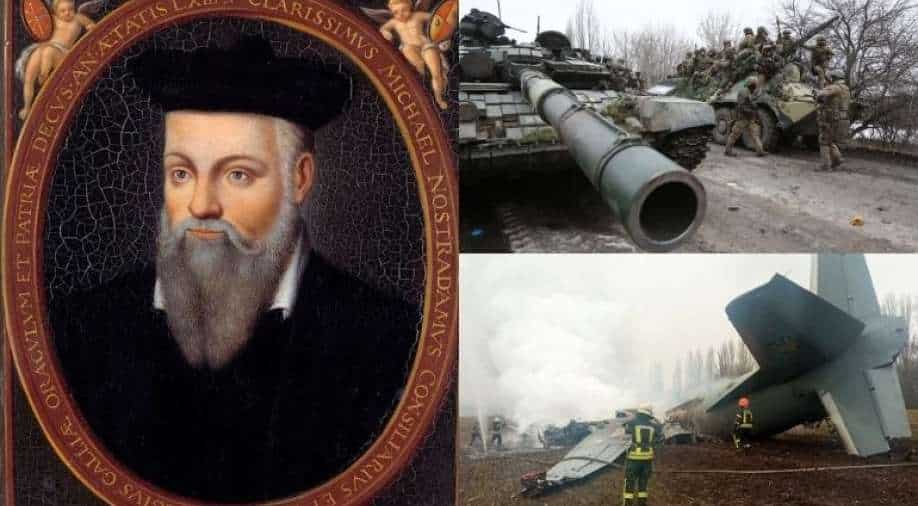 'A huge conflict would spread to Western Europe this spring,' according to a famous soothsayer. Photograph:( Twitter )

According to Nostradamus specialist Bobby Shailer, a Third World War could occur "within the next several years."

Time will tell if the current turmoil between Russia and Ukraine escalates to a Europe war or World War III, but it is clearly having a negative impact on the world as of now.

Nostradamus, a French astrologer and seer who is supposed to have written things of the future in his book Les Propheties in 1555, which contained 942 prophesies, predicted a war in Europe in 2022.

One of his 942 predictions was a hazy idea that France would face an eastward danger.

'Blue-head shall white-head harm in such degree, As France's good to both shall e'er amount,' it says.

However, according to Nostradamus specialist Bobby Shailer, a Third World War could occur "within the next several years."

'Nostradamus believes it will be a great protracted war, 25 to 29 years, followed by lesser battles,' he stated last year.

But, he added, there will be a 'age of Saturn,' which will last a thousand years and be a time of peace.

He also predicted that the globe will be hit by an asteroid, that floods and droughts would ruin entire countries, and that mass hunger would occur in 2022.

Nostradamus is attributed with foreseeing a number of international events, including the Great Fire of London, the rise of Adolf Hitler and Napoleon, the killing of John F Kennedy, and the terrorist attack on the World Trade Center on September 11, 2001.

Nostradamus foretold that the war will break out this year.

Some believe Nostradamus foresaw the catastrophe brought by global warming and asteroids, as well as the rise of AI technology.

The French astrologer and doctor, known as the 'Prophet of Doom,' was motivated by biblical scriptures and his personal plague experiences, and his forecasts concentrated on famine and grief.

Because Nostradamus' predictions are completely open to interpretation, his work has remained popular for more than 400 years.