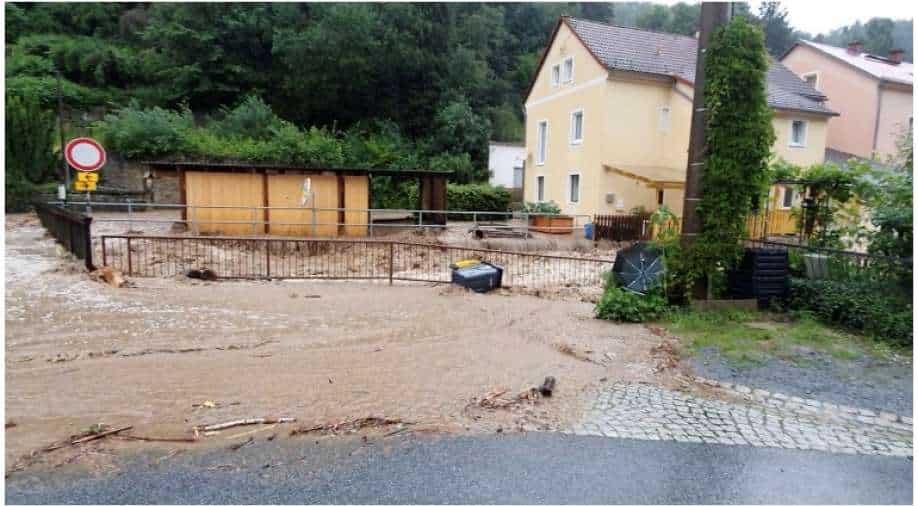 The workers on site are an army of unpaid volunteers who have taken on the colossal task of rebuilding towns that were devastated by deadly floods in western Germany seven weeks ago that washed away homes, offices and infrastructure

Instead of the shouts of noisy children, the halls of the primary school in the German town of Dernau are filled with the deafening sound of a dozen drills.

The workers on site are an army of unpaid volunteers who have taken on the colossal task of rebuilding towns that were devastated by deadly floods in western Germany seven weeks ago that washed away homes, offices and infrastructure.

Some are locals, or helpers at public organisations like the Red Cross or the fire brigade, but many others have travelled in from across the country, helping to clear up debris by day and sleeping in makeshift camps by night.

Although the government has pledged 30 billion euros to fund the reconstruction work, residents say most of the help they receive comes from private people like the volunteers in Dernau.

With less than a month to go before general elections, politicians are "having a mud fight, but the real mud fight is here -- and they're not," says one volunteer, Christine Jahn.

Before the floods, Dernau was a picturesque town, framed by steep valley slopes covered in vineyards. Today, entire streets in the worst-hit areas are no longer inhabitable.

The school can no longer be used either: its pupils are now taking their classes elsewhere.

Inside the school, volunteers are working to strip flood-damaged walls, chipping away at a mural painted by the schoolchildren depicting the globe.

Two of those on site are Rebekka, 22, and her mother Judith, 52, who are working at the site together for the first time this week.

The end of the summer holidays in Germany has seen the number of volunteers ebb, but with more time to spare now her university exams are over, "I can still do my bit," Rebekka says.

Volunteers are essential to the clear-up, says Judith. "It's just faster to come here and get it done."

The mustering point for the volunteers is a short drive outside Dernau, in the shadow of a hulking factory of sweets-maker Haribo.

Some volunteers sleep here in tents and are provided with food, water, and the equipment they need to work in the flooded towns.

Jahn, 66, is in her last week at the camp, having come hundreds of miles from the east of Germany soon after the disaster struck.

A former construction worker, she started off "clearing mud" and "digging" wine bottles out of flooded cellars.

"I met some young people in the first three days and after that we always agreed to meet up each morning," Jahn says.

Now she is seeing to it that volunteers are well provided for, making coffee and sandwiches for hundreds.

German Chancellor Angela Merkel will on Friday visit the flood-stricken region for the second time.

But concrete help from politicians has been slow to arrive, according to Jahn.

"I want less babbling and more getting on with it, so that the money arrives without bureaucracy."

At the town's former train station, a quaint building with red-lacquered timber beams, another volunteer, Daniel, was taking delivery of bottles of water.

The station has been turned into a supplies shop called "Tante Emma" ("Auntie Emma's") that is stocked by donations, providing food, essentials and tools to local residents to help them repair their lives.

The shop entrance is piled high with nails, screws, and bottles of water behind a makeshift petrol pump.

One of several to manage the store, Daniel had come to the area with friends five weeks ago and decided to stay.

"I have a new contract in a hospital from December 1, but until then I have time," says the 29-year-old careworker.

"Without volunteers nothing here would work," says Daniel, "our institutions have completely failed."

"The longer ago the floods were, the more we need help," he says, urging more people to provide support.

Marita, 78, a resident of Dernau forced to leave by the disaster, says: "We don't get much from the state.

"Most of it comes from private people and donations," she says.

While her house is being repaired, Marita has moved in with her daughter two hours away in Mainz.

She plans to move back one day. "This is where our friends are, where we grew up and we’ll continue living here."