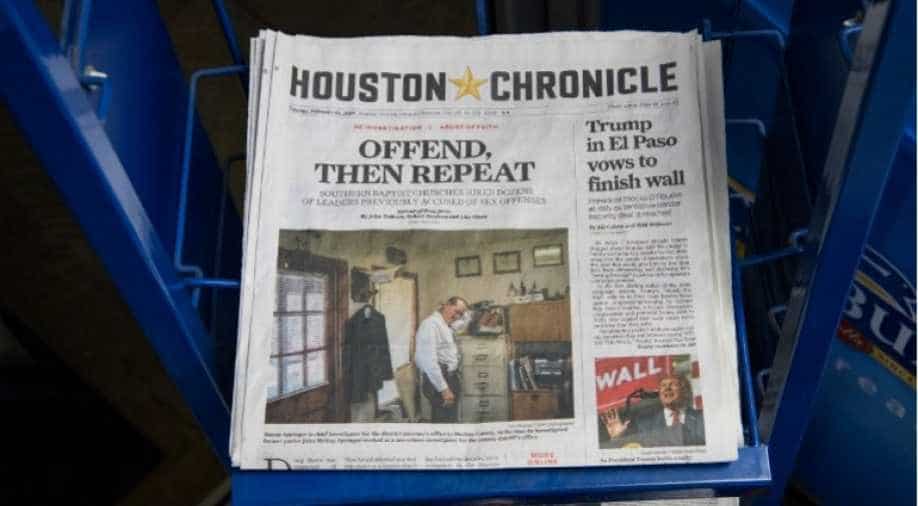 A report featuring a story on accusations of abuse in Southern Baptist churches at a gas station in Houston, Texas. Photograph:( AFP )

The report by two Texas newspapers found some 380 church leaders and volunteers have faced public accusations of abuse, mostly of children as young as three years old.

The United States' largest Protestant denomination, the Southern Baptist Convention, is facing a sexual abuse crisis after a bombshell report revealed hundreds of predators and more than 700 victims since 1998.

The report by two Texas newspapers found some 380 church leaders and volunteers have faced public accusations of abuse, mostly of children as young as three years old.

Some of the accused continued to work at Southern Baptist churches, the newspapers said.

In response to the report, church officials acknowledged the number of victims could actually be higher and urged survivors to come forward.

"One of the things I'm encouraged by are the number of pastors that are actively engaged right now," in the report's aftermath, convention leader Russell Moore told AFP on Tuesday.

The revelations threatened to engulf the denomination — with some 47,000 churches and 15 million members mostly in the southern US — in the same type of scandal that has roiled the Catholic Church.

A more comprehensive response was likely to come from the Southern Baptist organization next week when president JD Greear "is scheduled to give an update on a sexual abuse study he commissioned last summer," said spokesman Roger Oldham.

Unlike the Vatican, the Southern Baptist Convention is a loose network of churches allowed to run autonomously, ordain their own ministers — who are not required to be celibate — and hire staff and volunteers based on each church's own standards.

The decentralized system, which lacks a shared database of personnel records, has been rife for exploitation by sexual abusers, according to the investigative report first published over the weekend by the Houston Chronicle and the San Antonio Express-News.

Lax oversight allowed some abusers with criminal convictions — even registered sex offenders — to continue working at Southern Baptist churches, according to the report, which found 220 offenders who were convicted or took plea deals.

"But churches can decide with whom they fellowship," he said. "No one can use church autonomy as an excuse." In at least 35 cases, abusers were able to leave one church and find work in another over the last two decades. In some cases, congregations knew about past abuse.

For example, Illinois pastor Leslie Mason was convicted in 2003 on two counts of sexual assault. After being released from prison, he went on to lead a different church nearby.

Florida pastor Darrell Gilyard, released from prison in 2011 after a criminal sex abuse conviction involving two girls, returned to preach services which children could not attend because a court order required him to stay away from minors.

Moore said some Southern Baptists held erroneous views of forgiveness that "assumes these predators should be simply given a second chance." In other instances, he said, churches believed horrific crimes could not occur within their ministries.

Moore also acknowledged that the Southern Baptist Convention rejected a proposal in 2007 that it should establish a registry to track abuse claims and prevent predators from getting rehired by other churches.

The newspapers found hundreds of abuse cases in the years since. And past church leaders have been accused of concealing or mishandling complaints.

"As a denomination, now is a time to mourn and repent. Changes are coming. They must," said Greear, the convention's current president, on Twitter.

The Survivors Network for those Abused by Priests (SNAP), an organization mostly focused on the Catholic Church's abuse scandal, urged Southern Baptist survivors to report crimes to law enforcement.

"It is critical that law enforcement officials at every level of government look into these cases," the organization said in a statement.