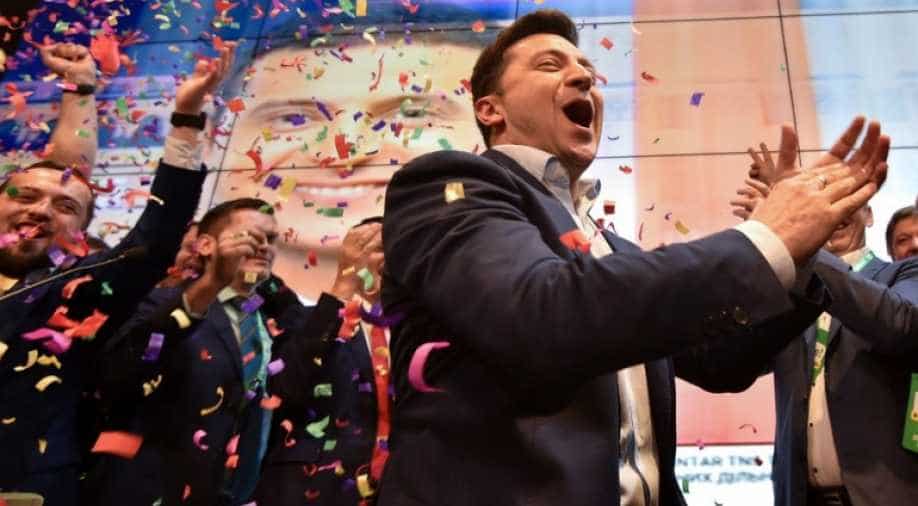 The 41-year-old actor won a landslide victory against incumbent Petro Poroshenko on Sunday.

Comedian Volodymyr Zelensky's election will see Ukraine led for the first time by a president of Jewish descent, in a landmark for a country with a long history of anti-Semitism.

The 41-year-old actor won a landslide victory against incumbent Petro Poroshenko on Sunday.

His triumph has been hailed as a sign of tolerance in the ex-Soviet country accused by some of having a lax attitude towards neo-Nazi groups.

Ukraine already has a Jewish prime minister, Volodymyr Groysman, also 41, and who is to remain in office pending parliamentary elections scheduled for October.

"This says a lot about the maturity of the Ukrainian people," he told AFP.

"Relations between Ukrainians and Jews have not always been easy," he noted.

"Ukraine is the only country in the world, aside from Israel, where the president and prime minister are Jewish," Eduard Dolinsky, a Jewish community leader, wrote on Facebook.

Zelensky has said he considers religion to be a private affair and has christened his children in the Orthodox tradition, according to Ukrainian media.

While the election campaign was fierce and saw opponents exchange various insults, Zelensky's ancestry was not used as a motive for attacks.

This was far from trivial in a country where during the Soviet period, as in the rest of the USSR, being Jewish was not considered a matter of faith, but one of nationality and marked as such on identity papers.

The first Jewish massacres in what is now Ukraine date back to the 17th century, during an uprising against Polish rule led by Cossack military leader Bohdan Khmelnytsky, when thousands of Jews were killed.

Thousands more were killed during another revolt against the Poles in the 18th century.

Between 1917 and 1921, a period of fierce fighting between Russia's White and Bolshevik armies and Ukrainian nationalist armies was marked by a wave of pogroms.

Ukraine's Jews were almost wiped out during the Holocaust, in which some Ukrainians collaborated with Nazi authorities.

In Babi Yar, a ravine on the outskirts of Kiev, 34,000 Jews were slaughtered in just two days in one of the worst single massacres of the Holocaust.

Other Ukrainians risked their lives to help Jews during the Nazi occupation, however.

More than 2,600 Ukrainians have been recognised as "Righteous Among the Nations" by the Yad Vashem memorial centre in Jerusalem for saving Jews during World War Two.

Now independent, Ukraine has once again been singled out for alleged anti-Semitism.

Far-right groups played an active role on the barricades of the 2014 pro-Western Maidan revolution.

The uprising ousted a pro-Russia president and was followed by Moscow's annexation of Kiev's Crimea peninsula and war with separatists in eastern Ukraine.

Russia has denounced the pro-Western authorities in Ukraine as a "neo-Nazi" and "fascist" regime.

Rabbi Moshe Reuvan Azman said this is far from the case.

"The level of anti-Semitism in Ukraine is lower than in Russia and in Europe, I see it clearly," he said.

According to a study published last year by the American Pew Research Center, five per cent of Ukrainian adults does not want to accept Jews as fellow citizens.

An article in the Israeli daily Haaretz said Zelensky's victory did not mean the end of anti-Semitism in Ukraine but represented "attempts to articulate a new sense of Ukrainian nationhood, one that can be more at peace with its troubled past."