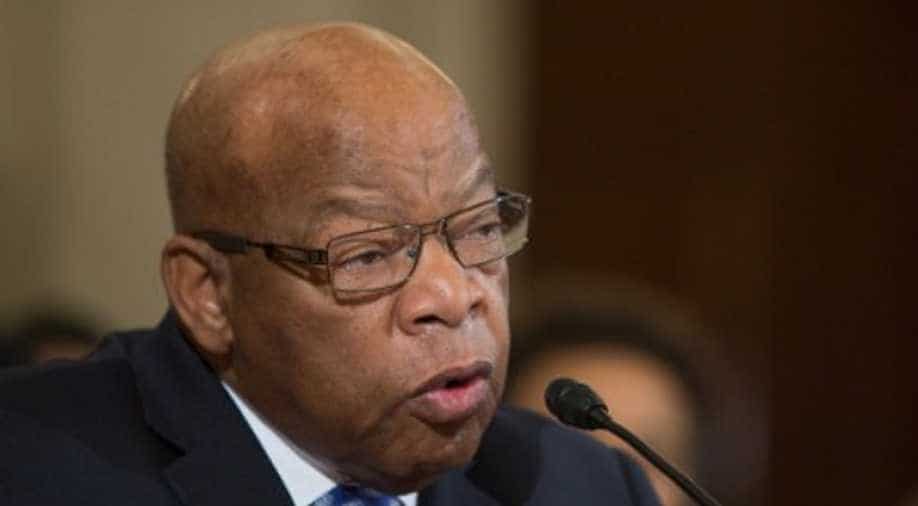 On Saturday Trump tweeted that Lewis 'should spend more time on fixing and helping his district, which is in horrible shape and falling apart (not to mention crime infested).' Photograph:( AFP )

US President-elect Donald Trump on Saturday hit back at civil rights leader and politician John Lewis who had said that he did not see Trump as a "legitimate president".

Trump tweeted Lewis should focus more on "fixing and helping his district" and not make false complaints about election results.

Congressman John Lewis should spend more time on fixing and helping his district, which is in horrible shape and falling apart (not to......

mention crime infested) rather than falsely complaining about the election results. All talk, talk, talk - no action or results. Sad!

In a segment of "Meet the Press" released by NBC on Friday, Lewis said he believed Russians helped Trump in his Nov.8 election victory. He also said that he would not be attending the Jan.20 inaugration, missing it for the first time since he was elected to the House in 1896.

"I believe in forgiveness," Lewis said in the segment about Trump. "I believe in trying to work with people," Lewis said. "It’s going to be very difficult. I don’t see this president-elect as a legitimate president."

"I think the Russians participated in helping this man get elected. And they helped destroy the candidacy of Hillary Clinton," he told the network

"You cannot be at home with something that you feel that is wrong."

The democratic representative has been a civil rights leader for more than half a century whose districts include Atlanta and surrounding areas.

Trump's verbal attacks come just days before the holiday honouring civil rights icon Martin Luther King Jr. Reuters reported that Lewis had protested alongside King in 1963. He was beaten by police during a march he led in 1965 in Selma, Alabama. The day later became knows as "Bloody Sunday".

At least 2,000 people marched against Trump to a park near the monument to King in Washington on Saturday.

Some chanted, "We will not be Trumped."

"We won't go back," said civil rights leader Al Sharpton, calling on marchers to fight to defend the accomplishments of Barack Obama's eight years in the White House, reported AFP.

"We want this nation to understand what has been fought for and gained," he added. "You are going to need more than one election to turn it around."

Trump's swearing-in ceremony at the US Capitol next Friday will be boycotted by at least 16 House democrats in an act of political protest.

Senator Ben Sasse of Nebraska tweeted that "John Lewis and his 'talk' have changed the world."

US intelligence organisations believe Russians manipulated the presidential elections in Trumps's favour. They have also accused Russia of cyberattacks.

Trump has admitted to Russian interference but denied it helped him in defeating rival Hillary Clinton.