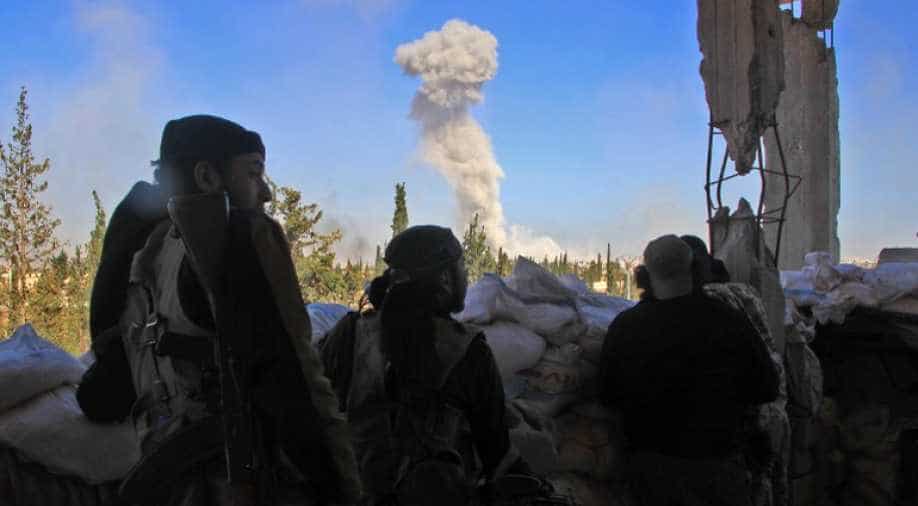 In photo: Rebel fighters from the Jaish al-Fatah brigades on November 3, 2016 Photograph:( AFP )

Syrian rebels shelled government-controlled parts of Aleppo on Thursday in an attempt to break a siege of the eastern part of the city hours before the Russian-declared ceasefire was due to begin.

Rebels have been unable to break a three-month siege through government lines in western Aleppo.

"We have started the second phase in our fight to break the siege with heavy artillery fire" on several neighbourhoods, rebel fighter Abu Hamza told AFP on the edges of Aleppo.

The Syrian Observatory for Human Rights monitor said the "most intense fighting" was on the edges of Halab al-Jadida neighbourhood.

The United Nations on October 25 had blamed all sides in Syria after renewed fighting and air strikes in the Syrian city of Aleppo prevented the medical evacuations and aid deliveries from reaching the war-ravaged city.

UN aid agencies had held days of negotiations to try to secure safe passage for the sick and wounded, but the effort came to a halt when fighting resumed after three days of truce.

Rebel fire killed at least 12 people and wounded more than 200, SANA news agency said. The Observatory said 15 had been killed, four of them children. A total of 69 civilians have been killed in rebel fire since Friday.

Russia on Wednesday told Syrian rebels in Aleppo to leave by Friday evening, indicating a moratorium on air strikes in the war-battered city.

The Russian defence ministry said that rebels would be allowed to exit the city unharmed and with their weapons on November 4 between 0900 and 1900 local time through two special corridors.

Rebels have,however, rejected the calls and denied there were corridors, a member of an Aleppo-based insurgent group told Reuters.

"This is completely out of the question. We will not give up the city of Aleppo to the Russians and we won't surrender," Zakaria Malahifji of the Fastaqim rebel group told Reuters.

No UN aid convoy has entered Aleppo since July 7 and food rations will run out by the end of October, UN chief Ban Ki-moon had warned last month.

Once Syria's economic powerhouse, Aleppo has been divided since mid-2012 between government control in the west and rebels in the east, AFP said.

More than 300,000 have been killed in Syria since the conflict began in 2011 with anti-government protests that spiralled into a multi-front war involving regime, rebels, Kurds and jihadists like IS.