Standoff between Canadian police and protestors continues for over 7 hours 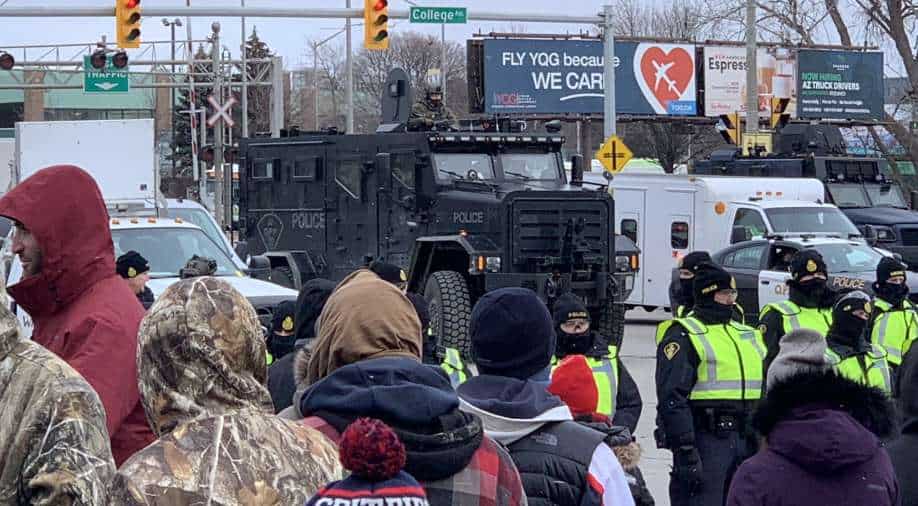 Standoff between Canadian police and protestors continues for over 7 hours Photograph:( Twitter )

These demonstrators have occupied the Ambassador Bridge for the fifth straight day. While police somehow managed to successfully push back protesters, more people gathered into the area

A standoff between Canadian police and protesters continued for over seven hours after the police on Saturday arrived at the protest sites to remove demonstrators who have majorly disrupted Canada-US trade.

The demonstrators in Ottawa, Ontario and elsewhere are primarily demanding an end to all Covid vaccine mandates and other restrictions including mask requirements — though most of those were put in place by provincial governments. Protesters have called, too, for Trudeau’s resignation.

These demonstrators have occupied the Ambassador Bridge for the fifth straight day. While police somehow managed to successfully push back protesters, more people gathered into the area.

Hundreds of police square off with protesters at the Ambassador Bridge in Windsor, Ontario. End the Mandates. pic.twitter.com/hBx62BF9vj

This is how the operation was stalled.

Michael Kempa, an associate professor of criminology at the University of Ottawa, while speaking to CBS News said, "It would essentially send a message that the state is not able to retain control, where it's attempted to do so. The longer this drags on, the longer people have the idea that what they are doing is not an illegal protest."

The police while speaking to the crowd through the loudspeaker said, "We are opening up this intersection to traffic. If you fail to comply with our instructions you will be arrested."

According to a report by the Associated Press, a man with “Trump 2024” and “Mandate freedom” spray-painted on his vehicle left without any resistance after dozens of police officers moved around his car. However, not everyone left.

This comes after a Canadian court ordered protesters blocking the Ambassador Bridge, which happens to be a vital trade corridor between Canada and the US, to leave right away.