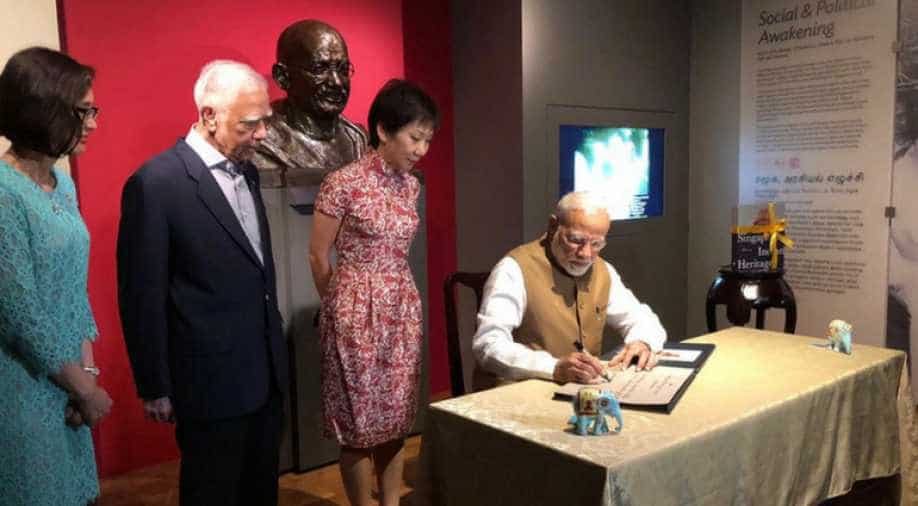 PM Modi unveiled the Kala Sangam, a permanent platform established by High Commission of India, Singapore and Indian Heritage Centre, Singapore to bring Indian artisans to Singapore to demonstrate the craft, make and sell their products. Photograph:(Others)
Follow Us

Over 250 members of Indian diaspora led by Singapore's Emeritus Minister Goh Chok Tong joined the ceremony at the pier, 70 years after a part of the Mahatma's ashes were immeresed in the Singapore water with a plane showering flowers and petals.

Modi, who is here on the last leg of his three-nation tour, unveiled the plaque on the seafront where some of the Mahatma's ashes were immersed in 1948.

"Emeritus Senior Minister Goh Chok Tong and I unveiled a plaque marking the site where Mahatma Gandhi's ashes were immersed at the Clifford Pier in Singapore," Modi tweeted.

"Bapu's message reverberates globally. His thoughts and ideals motivate us to work for the greater good of humanity," he said.

After Gandhi's death in 1948, his ashes were sent to various parts of India and the world, including Singapore, for immersion.

Modi and Goh unveiled the plaque at the pier, which is now a heritage landmark in the Fullerton Hotel Complex.

"The unveiling of plaque of the Mahatma is remembrance again of Gandhi as a global figure and his relationship with all his Indian diaspora globally. That is the significance of this event," said Ameerali Jumabhoy, a 93-year old Singaporean businessman, who leads Gandhi Jayanti celebration in Singapore every year as a leading members of the Global People of Indian Origin.

Following the unveiling of the plaque, Gandhi's picture carved in gold leaf and framed in table-top were gifted to people who attended today's ceremony.

Later, Modi visited the National Orchid Garden of Singapore where an orchid was named after him.

Modi arrived here on Thursday on the last leg of his three-nation visit.