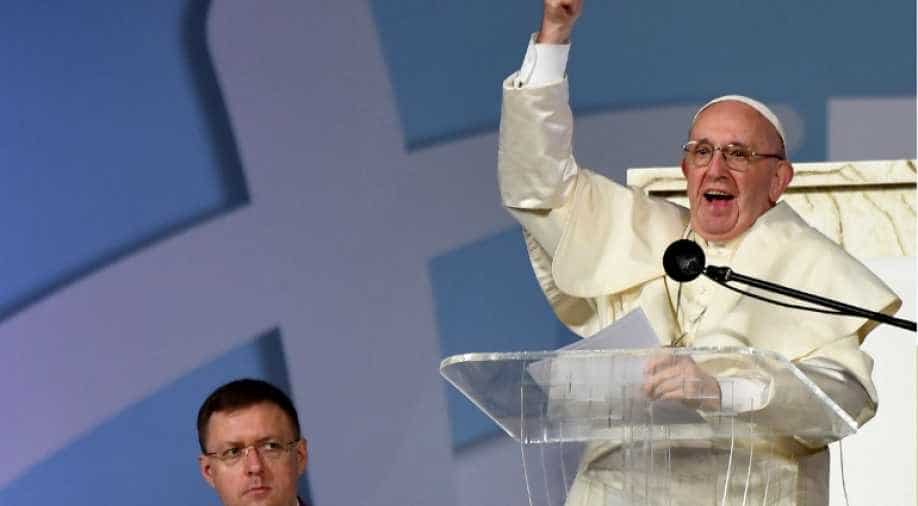 Making up around 10 per cent of Romania's 20 million people, many Roma are marginalised and live in poverty and have suffered centuries of discrimination and insults.

Pope Francis apologised to the Roma people on Sunday for the Roman Catholic Church's "discrimination" against them as he wrapped up a visit to Romania.

Making up around 10 per cent of Romania's 20 million people, many Roma are marginalised and live in poverty and have suffered centuries of discrimination and insults.

"I ask forgiveness – in the name of the Church and of the Lord – and I ask forgiveness of you. For all those times in history when we have discriminated, mistreated or looked askance at you," the pope said in a speech to the Roma community in the central town of Blaj.

"My heart, however, is heavy. It is weighed down by the many experiences of discrimination, segregation and mistreatment experienced by your communities. History tells us that Christians too, including Catholics, are not strangers to such evil," he said.

"Indifference breeds prejudices and fosters anger and resentment. How many times do we judge rashly, with words that sting, with attitudes that sow hatred and division!"

"The new blessed ones suffered and sacrificed their lives, opposing a system of totalitarian and coercive ideology," he told some 60,000 worshippers attending mass on a "Field of Liberty" in Blaj.

"These shepherds, martyrs of faith, garnered for and left the Romanian people a precious heritage which we can sum up in two words: freedom and mercy," added Francis, while praising the "diversity of religious expression" in mainly Orthodox Romania.

Regime officials detained the beatified bishops overnight on October 28, 1948, accusing them of "high treason" after they refused to convert to Orthodoxy.

The Greek-Catholic Church was outlawed under 1948-89 Communist rule.

The bishops died of maltreatment, some still in jail, others in confinement in an Orthodox monastery. They were then buried in secret -- to this day the whereabouts of four of their graves is unknown.

The bars of the cells where they were held were symbolically incorporated into the throne built specially for the papal visit.

The bishops followed the Eastern Rite Catholic Church which emerged from an Orthodox schism at the end of the 17th century when the central region of Transylvania was part of the Austro-Hungarian empire.

Under such stark political repression, most Romanian Catholics -- who numbered more than 1.5 million in 1948, abandoned their faith and their community has shrunk to around 200,000 today in a country of 20 million, almost nine in 10 of whom profess Orthodoxy.

The politics which has seeped through Romania's modern religious history has poisoned inter-faith relations -- even if the papal visit has softened feelings to a degree.

"No matter where we go, to the town hall, to the police or to school, doors get closed," a 72-year-old Roma, who gave his name as Ion, told AFP.

Roma, originating from northern India, suffered around five centuries of slavery before the practice was formally abolished in 1856.

But they remain a mainly poor and marginalised community -- even if recent years have seen roads paved and homes getting running water and electricity.

Francis's arrival in Blaj to wind up his visit was part of his attempt at inclusiveness on his three-day visit to one of what remains Europe's poorest states.

Although Romania has developed apace since obtaining EU membership in 2007 there remain some "urban or rural ghettos where nothing has changed," according to sociologist Gelu Duminica, who heads the anti-discrimination Impreuna (Together) association.

Duminica and others in Blaj saw it as no coincidence that Francis, often seen as a defender of the rights of the most marginalised, chose the Barbu Lautaru district of Blaj, whose inhabitants are mainly Roma, to launch his appeal for tolerance and social inclusion.

"The pope's visit is a message for those who are marginalised, disregarded or not accepted by others," said Mihai Gherghel, an eastern Catholic priest, who supervised the construction of the Blaj church where Francis celebrated Sunday mass.