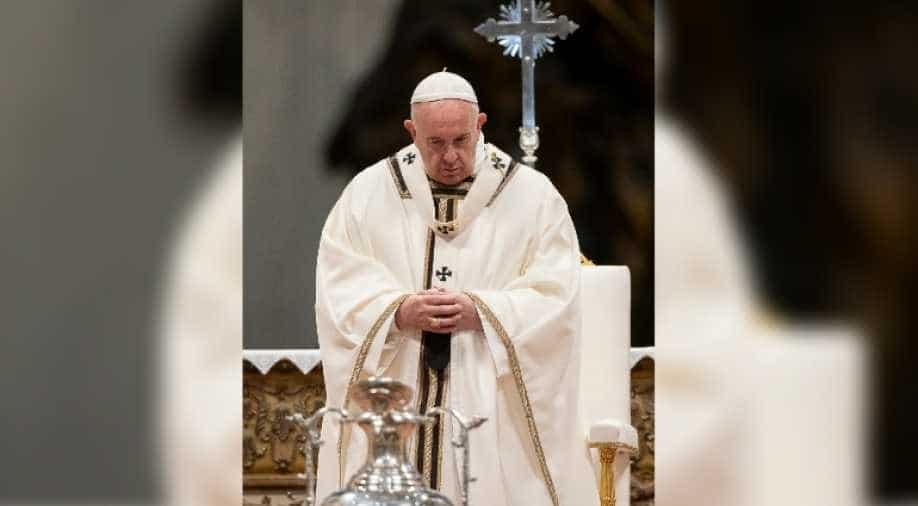 Pope Francis looking at an amphora containing holy oil during the Holy Chrism Mass on Maundy Thursday in the Vatican. Photograph:( AFP )

The decree is the second such papal provision since a summit on abuse by senior Church bishops at the Vatican in February.

Pope Francis introduced sweeping changes in Catholic Church law on Thursday to hold bishops accountable for sexual abuse or covering it up, making reporting obligatory for clerics and allowing anyone to complain directly to the Vatican if needed.

A papal decree, which covers abuse of both children and adults, also obliges every Catholic diocese in the world to set up simple and accessible reporting systems and encourages local churches to involve lay experts in investigations.

The decree is the second such papal provision since a summit on abuse by senior Church bishops at the Vatican in February.

It sets time limits for local investigations and the Vatican's response to them and allows for retroactive reporting.

It also says bishops with conflicts of interest should recuse themselves from investigations and that they can also be held accountable for abuse of power in sexual relations with adults.

The 19-article decree, called "Vos Estis Lux Mundi" (You Are the Light of the World), raises to 18 from 16 the age of adulthood in cases of sexual abuse. It also covers possession of child pornography.

The decree says local Church officials cannot order those who report abuse to remain silent and that senior bishops should make provisions to prevent documents from being destroyed by subordinates if needed.

Clerics should follow local law on whether they are obliged to report alleged sexual abuse to civil authorities.