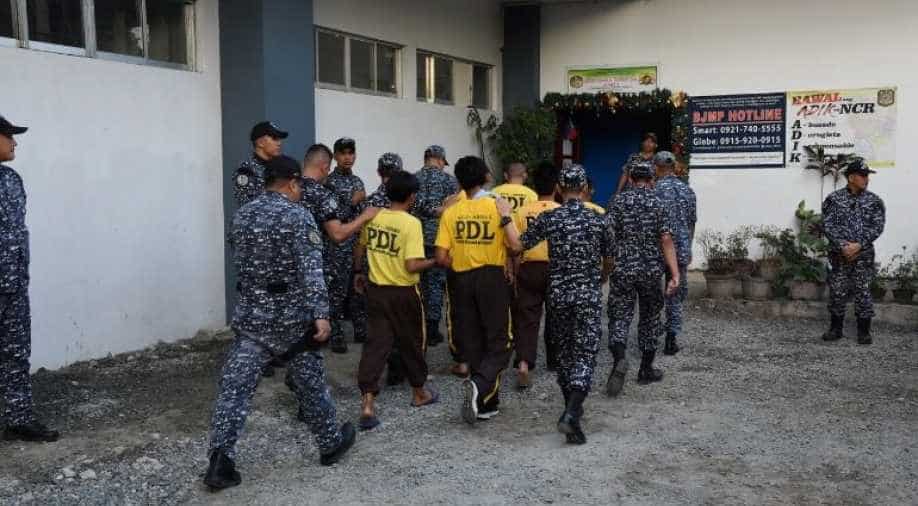 Some of the accused in the 2009 Maguindanao Massacre are escorted to attend the promulgation of the case, inside a prison facility in Taguig City, Philippines Photograph:( Reuters )

A judge in the Philippines prepared to deliver a verdict on Thursday on the massacre a decade ago of 58 people, among them 32 journalists, in one of the country's most high-profile cases and its worst single instance of election violence.

A judge in the Philippines prepared to deliver a verdict on Thursday on the massacre a decade ago of 58 people, among them 32 journalists, in one of the country's most high-profile cases and its worst single instance of election violence.

Three generations of a political clan accused of masterminding the 2009 killings are among 101 defendants awaiting judgement, in a case seen as a crucial test of impunity in country where provincial power is often decided by corruption, intimidation and violence.

Seven members of the influential Ampatuan family are accused of conspiring to ambush the convoy of a rival clan as it travelled to register its candidate for a gubernatorial election in the southern province of Maguindanao, an attack that spiralled into a bloodbath.

Among the casualties were the wife and relatives of the rival candidate, lawyers and 32 media workers, who were executed beside a rural road in a volley of gunfire, before being buried with their vehicles in a huge pit dug by an excavator.

It was one of the world's single, biggest attacks on journalists. The defendants deny charges of multiple counts of murder and face up to 30 years in jail for each one.

There were 357 witnesses and 197 suspects, 80 of those still at large, including 12 Ampatuans. The family patriarch, Andal Ampatuan, died in prison of a heart attack in 2015.

Five other Ampatuan family members and 54 police are also on trial and lawyers for the families said a guilty verdict would be crucial for Philippine democracy.

"We are rooting for a conviction no more, no less," Nena Santos, a private prosecutor in the case, told reporters.

"This is very important because if no conviction here it would mean the impunity continues, press freedom is dead and the democratic process is at stake."

The judge and lawyers were in discussions about how much of the verdict to read out from its more than 700 pages.

The attack, known as the "Maguindanao Massacre", was chilling even by Philippine standards, where political assassinations are commonplace in elections for mayors, governors and even congress. Several witnesses in the case have been killed.

Muslim-dominated parts of the southern Philippines are notoriously violent, prone to lawlessness, separatist unrest and the rule of warlords aided by an abundance of arms.

Human Rights Watch said that regardless of the verdict, suspects on the run must be caught.

"The families of Maguindanao victims and witnesses will be at risk so long as suspects remain free," said Phil Robertson, the group's deputy Asia director.