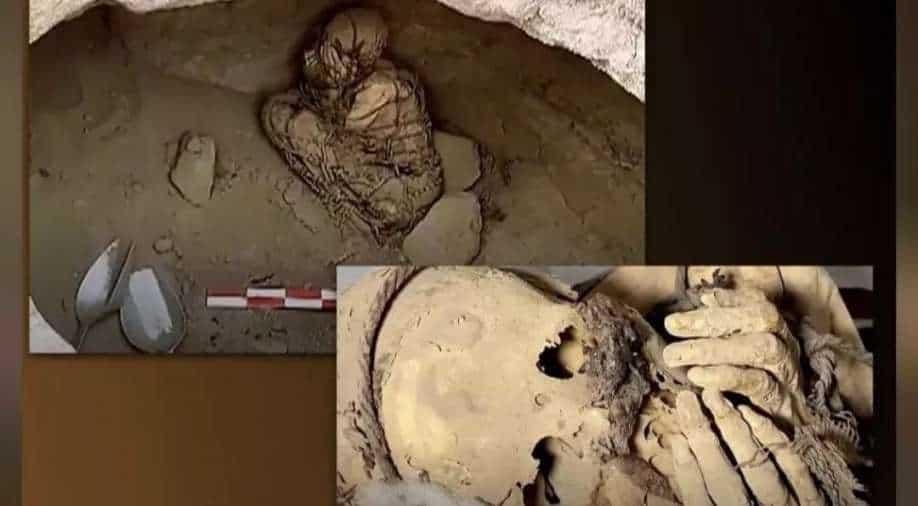 A team of archaeologists unearthed a mummy which is estimated to be at least 800 years old Photograph:( Twitter )

In a recent discovery, a team of archaeologists unearthed a mummy which is estimated to be at least 800 years old. The discovery was made on Peru's central coast.

"The main characteristic of the mummy is that the whole body was tied up by ropes and with the hands covering the face, which would be part of the local funeral pattern," said Van Dalen Luna, from the State University of San Marcos.

WATCH: A mummy estimated to be at least 800 years old was found in a tomb in Peru https://t.co/eUlCqZxfON pic.twitter.com/ba7h58jjPH

Luna further revealed that the remains are of a person who lived in the high Andean region. "Radiocarbon dating will give a more precise chronology," he said.

Images and videos of the mummy have gone viral on social media.

It is being said that the remains were of a person from the culture that developed between the coast and mountains of the South American country. It was found inside an underground structure found on the outskirts of the city of Lima. The gender of the mummy has not yet been recognised. However, the tomb also offered things like ceramics, vegetable remains and stone tools.

Meanwhile, earlier this month, archaeologists unearthed 29 human bodies entombed around 1,000 years ago at a site in the Lambayeque region of northwestern Peru. The site is at Huaca Santa Rosa de Pucalá.
Four skeletons, which are of two children, a teenager and one adult, date back to the Wari civilisation.