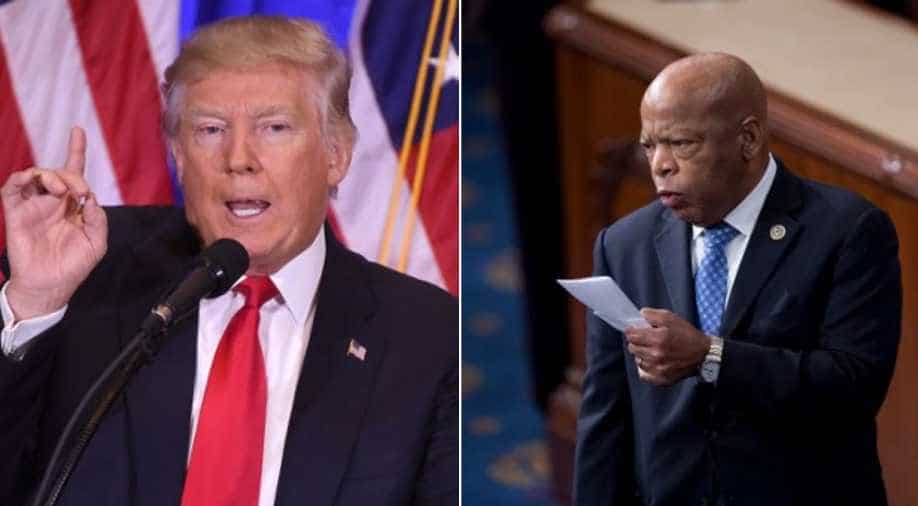 On Saturday Trump tweeted that Lewis 'should spend more time on fixing and helping his district, which is in horrible shape and falling apart (not to mention crime infested).' Photograph:( AFP )

Donald Trump's vice-president and top aides joined the US president-elect in criticising US Representative John Lewis, a Georgia Democrat, civil rights activist and lawmaker for questioning the legitimacy of his election win, opening up a new divide days before the inauguration.

US Representative John Lewis, told NBC's "Meet the Press" he thought hacking by Russians had helped Trump, a Republican, to get elected in November. Lewis said he does not plan to attend Trump's swearing in on Friday, the first time he would miss such an event since being elected to the House in 1986.

"We honour the sacrifice that he made," Pence said on CBS' "Face the Nation." "For someone of his stature not just in the civil rights movement but in voting rights to make a comment that he did not consider Donald Trump to be a legitimate president I think is deeply disappointing. I hope he reconsiders both statements."

Pence said he had attended both of President Barack Obama's inaugurations. He said at a time when the country was facing challenges both at home and abroad, Americans should look for ways to come together and work together. The 76-year-old Lewis, who has been a civil rights leader for more than half a century, was beaten by police during a march he helped lead in 1965 in Selma, Alabama, drawing attention to hurdles preventing blacks from voting. He protested alongside leader Martin Luther King Jr. that day and on other occasions. The spat comes ahead of Monday's federal holiday that honours King.

Speaking on ABC's "This Week", Priebus said Lewis' comments, given his position in society, were irresponsible. "We need folks like John Lewis, and others who I think have been champions of voter rights, to actually recognise the fact that Donald Trump was duly elected," said Priebus. "I think putting the United States down across the world is not something that a responsible person does."

Outgoing White House Chief of Staff Denis McDonough said Obama believed that Trump was the freely elected president. McDonough, however, said concerns raised by Lewis and other Democrats about Russia's interference in the election were not trivial.

"My hope would be that the president-elect will reach out to...John Lewis, who has done so many things over the course of his life, to try to work this out," McDonough said on CNN's State of the Union. Such a gesture, he said, would show Americans that the nation is united and send a message to the Russians that "their efforts to divide us, to weaken us, to advance their own interests, at the expense of ours, are going to fail."

Trump's aides defended his hard-hitting response on Twitter on Saturday that Lewis "should spend more time on fixing and helping his district, which is in horrible shape and falling apart (not to mention crime infested)," instead of complaining about the November 8 election results.

Lewis' district encompasses Atlanta and the city's main newspaper, the Atlanta Journal-Constitution, told Trump he was "wrong" in his characterization of the area, which includes "many of Atlanta’s crown jewels as well as pockets of poverty."

"It was John Lewis that attacked Donald Trump. Donald Trump has a right to respond to that, and he did. And forcefully," Spicer said on Fox News. But other Republicans and conservatives, like Senator Ben Sasse of Nebraska, had voiced support for Lewis on Saturday and his contribution not just to the United States, but to the world. At least 10 other Democratic politicians have said they also plan to skip the inauguration.