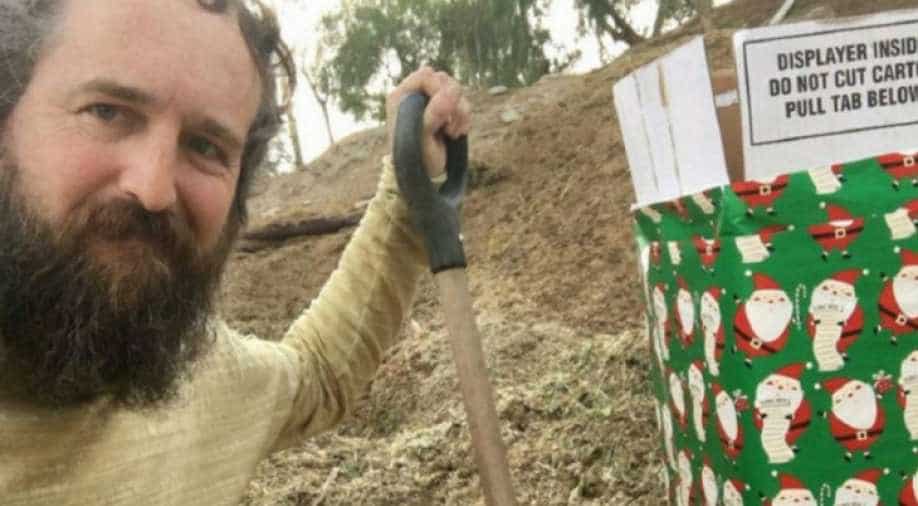 In a photo of the card Strong posted on Twitter, he wrote 'Misters Mnuchin & Trump, We're returning the 'gift' of the Christmas tax bill' and signed it 'Warmest wishes, The American people.' Photograph:( Reuters )

A man claiming to be the person who delivered a gift-wrapped package of horse manure at the Los Angeles home of US Treasury Secretary Steven Mnuchin said on Monday he did it to protest the federal tax overhaul signed into law last week by President Donald Trump.

Robert Strong, 45, a psychologist for the Los Angeles County Mental Health Department, said by telephone he left the poop-filled parcel addressed to Mnuchin and Trump in the driveway outside Mnuchin's home in the posh Bel Air community.

KNBC-TV, an NBC television affiliate in Los Angeles, reported Mnuchin was not home at the time. The package was found by Mnuchin's neighbour.

"Protest really should be funny," Strong told Reuters. "People's eyes glaze over when they just see angry people in the streets." He believes the new tax law will hurt poor people.

Neither the US Secret Service nor the Los Angeles Police Department, both of which investigated the incident, would confirm Strong was responsible. The Secret Service interviewed an individual who admitted delivering the package, but no charges had been filed against him as of Monday afternoon.

LAPD Lieutenant Rob Weise said it was possible whoever left the package did not break any criminal laws. While he is not assigned to investigate the incident, Weise said if the box did not present any danger, it would not be illegal. The LAPD bomb squad X-rayed the box before opening it on Saturday.

In a photo of the card Strong posted on Twitter, he wrote "Misters Mnuchin & Trump, We're returning the 'gift' of the Christmas tax bill" and signed it "Warmest wishes, The American people."

Strong said a Secret Service agent, accompanied by six police officers, showed up at his house to question him on Sunday night, and the agent chided him, asking, "'Are you ashamed of your behaviour?'"

The White House declined to comment on Monday and officials with the Treasury Department could not be reached.