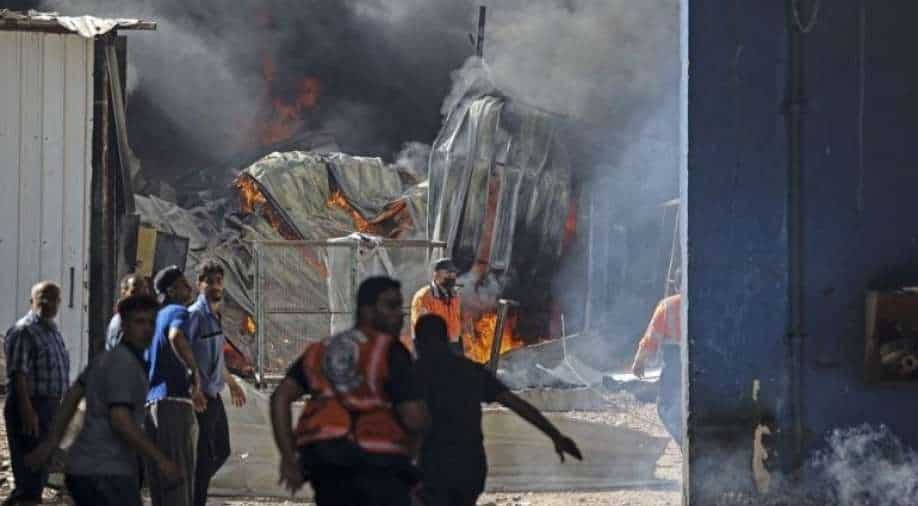 Palestinian firefighters rush to extinguish a huge fire at the Foamco mattress factory east of Jabalia in the northern Gaza Strip, on May 17, 2021. Photograph:(AFP)
Follow Us

Israel's army said in a statement that it hit the homes of nine "high-ranking" Hamas commanders, without providing details on casualties

The deadly clashes between Israel and Hamas militants escalated in what has become the heaviest flare-up since the 2014 Gaza War.

This came hours after Israeli Prime Minister Benjamin Netanyahu signalled the fourth war with Gaza's Hamas rulers would rage on. Hamas also pressed on, launching rockets from civilian areas in Gaza toward civilian areas in Israel.

The Israeli attack destroyed 15 kilometres (nine miles) of militant tunnels and the homes of nine alleged Hamas commanders, according to a news report by Israeli media outlet The Times of Israel.

Israel's army said in a statement that it hit the homes of nine "high-ranking" Hamas commanders, without providing details on casualties.

The overnight bombardment also included the third round of strikes on what the army calls the "Metro," its term for a Hamas underground tunnel network.

The renewed strikes come a day after 42 Palestinians in Gaza -- including at least eight children and two doctors, according to the health ministry -- were killed in the worst daily death toll in the enclave since the bombardments began.

In total, 197 Palestinians have been killed in Gaza, including at least 58 children, and more than 1,200 wounded since Israel launched its air campaign against Hamas on May 10 after the group fired rockets. The heaviest exchange of fire in years was sparked by unrest in Jerusalem.

In Israel, 10 people, including one child, have been killed and 294 wounded by rocket fire launched by armed groups in Gaza.

Israel's army said about 3,100 rockets had been fired since last Monday from Gaza -- the highest rate ever recorded -- but added it's Iron Dome anti-missile system had intercepted over 1,000.

Netanyahu said in a televised address Sunday that Israel's "campaign against the terrorist organisations is continuing with full force" and would "take time" to finish.

The Israeli army said it had targeted the infrastructure of Hamas and armed group Islamic Jihad, weapons factories and storage sites.

Israeli airstrikes also hit the home of Yahya Sinwar, head of Hamas's political wing in Gaza, the army said, releasing footage of plumes of smoke and intense damage, but without saying if he was killed.

On Saturday, Israel gave journalists from Al Jazeera and AP news agency an hour to evacuate their offices before launching airstrikes, turning their tower block into piles of smoking rubble.

"It is a legitimate target," he said.

The violence between Hamas and Israel is the worst since 2014 when Israel launched a military operation on the Gaza Strip with the stated aim of ending rocket fire and destroying tunnels used for smuggling.

The war left 2,251 dead on the Palestinian side, mostly civilians, and 74 on the Israeli side, mostly soldiers.

Opening the first session of the UN Security Council on the renewed violence on Sunday, Secretary-General Antonio Guterres called the fighting "utterly appalling".

"It must stop immediately," he said.

But the UN talks, already delayed by Israel's ally the United States, resulted in little action, with Washington opposing a resolution.

President Joe Biden's administration says it is working behind the scenes, and that a Security Council statement could backfire.

Israel is also trying to contain inter-communal violence between Jews and Arab-Israelis, as well as deadly clashes in the occupied West Bank, where 19 Palestinians have been killed since May 10, according to a toll from Palestinian authorities.

Major clashes broke out at the Al-Aqsa mosque compound -- one of Islam's holiest sites -- on May 7 following a crackdown against protests over planned expulsions of Palestinians in the Sheikh Jarrah neighbourhood of Israeli-annexed east Jerusalem.

Sheikh Jarrah has been at the heart of the flareup, seeing weeks of clashes between Palestinians and Israeli security forces.

On Sunday, a car-ramming attack in Sheikh Jarrah wounded seven police officers, police said, adding that the attacker had been killed.

Police also said "several suspects" had been arrested during clashes in another east Jerusalem neighbourhood overnight Sunday to Monday.

Guterres warned the fighting could have far-reaching consequences if not stopped immediately.

"It has the potential to unleash an uncontainable security and humanitarian crisis and to further foster extremism, not only in the occupied Palestinian territory and Israel but in the region as a whole."