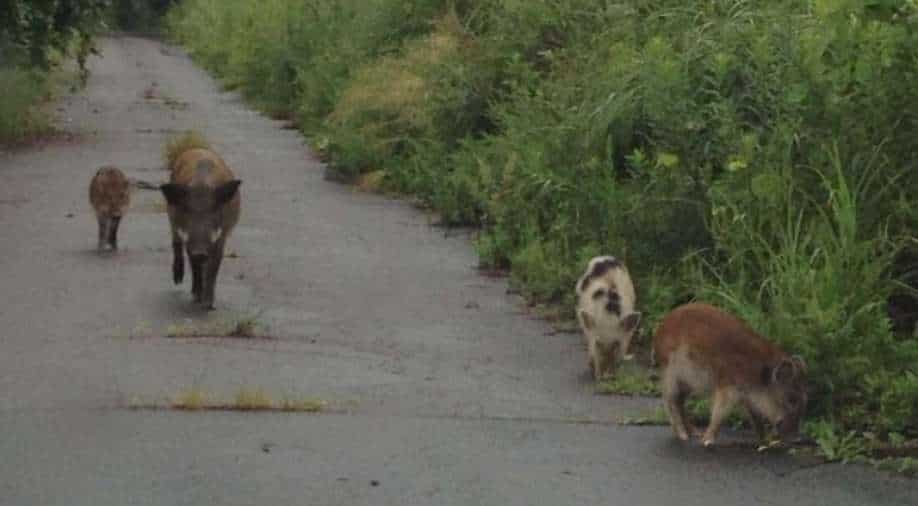 Hong Kong authorities captured and euthanised seven wild boars late on Wednesday as they began a campaign to reduce their numbers in urban areas around the financial centre after one bit a policeman last week.

The boar roundup in a district where authorities said some residents were spotted feeding them marks a policy shift in controlling the most commonly seen wild animals in the city.

It said boars in the residential area less than 30 minutes' drive from the heart of the financial district were "accustomed to wandering along the road and looking for food from passers-by or even chasing vehicles."

Last week, a wild boar knocked down a police officer and bit his leg, causing a deep wound and prompting Hong Kong leader Carrie Lam to warn the government would increase penalties for those who feed them.

That animal subsequently fell off the edge of a carpark, plunging about 10m (33 feet) to its death. About 30 boar attacks have been reported in recent years, authorities said.

Hong Kong's policy had been to capture the animals, then sterilise and relocate them to remote, unpopulated areas. The city is home to about 3,000 wild boars, according to government data, and they are not a protected species.

Also read | News anchor reacts to viral 'You' confusion video; was the joke on the viewers?

Boars have at times been seen on subway trains, or waiting for the traffic light to turn green at pedestrian crossings by the harbour. At the start of the coronavirus pandemic last year, when most Hong Kong people were working from home, a video of a boar family bathing in a fountain in between the financial district's skyscrapers went viral.

The shift in policy has sparked criticism from animal rights groups.

Roni Wong, a spokesman for the Hong Kong Wild Boar Concern Group, told reporters the boar problem was caused by the government, which had failed to allocate resources to deal with the animals peacefully.

"Now the animals have to pay for the cost," Wong said.

Lam said this week she understood many in Hong Kong loved wild animals, but "ultimately, our society has to ensure the safety of residents."

"As a responsible government, we need to take action," she told reporters at her weekly news conference on Tuesday.