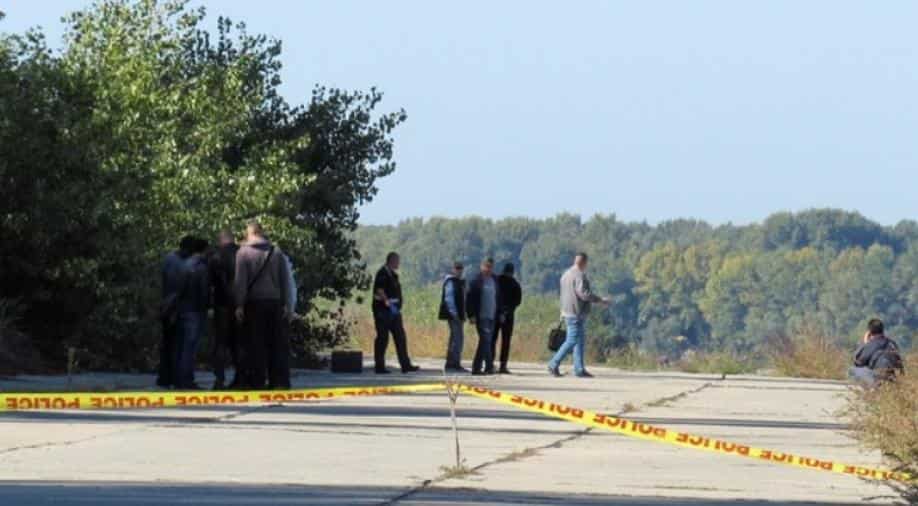 The body of 30-year-old Marinova -- who presented a current affairs talk programme called "Detector" for the small TVN television channel -- was discovered on a riverside path in the northern Bulgarian town of Ruse on Saturday.

But Bulgarian prosecutors said that, at least for now, the killing does not appear linked to her work as a journalist.

The body of 30-year-old Marinova -- who presented a current affairs talk programme called "Detector" for the small TVN television channel -- was discovered on a riverside path in the northern Bulgarian town of Ruse on Saturday.

Authorities said she died from blows to the head and suffocation. She was also raped.

The Bulgarian suspect was picked up late Tuesday at the request of Bulgarian authorities, Interior Minister Mladen Marinov told a news conference.

"We have enough proof linking this person to the scene of the crime," he said.

German police confirmed a 20-year-old man was arrested in the town of Stade near Hamburg on suspicion of raping, robbing and killing Marinova.
A German police statement said that the process of extraditing the man to Bulgaria had begun and that a request had been filed with the relevant regional court.

Such procedures under the European arrest warrant can take anything from a few days up to several weeks to complete.

Bulgaria's chief prosecutor Sotir Tsatsarov named the suspect as Severin Krasimirov, born in 1997, and said he was already sought in connection with another rape and murder.

"At this stage, we do not believe that the murder is linked" to Marinova's work, Tsatsarov said. "But we are continuing to look at all hypotheses."

"The evidence that we have at this stage leads us to believe it was a spontaneous attack to sexually abuse the victim."

The attack has shocked the country and drawn international condemnation amid speculation the murder could be linked to Marinova's work as a journalist.

An episode of her programme aired on September 30 featured interviews with two investigative journalists from Bulgaria and Romania who had been working on corruption allegations.

She is the third journalist to be murdered in Europe in the past 12 months after Jan Kuciak in Slovakia in February and Daphne Caruana Galizia in Malta in October 2017.

However, Bulgarian Prime Minister Boyko Borisov lashed out at international bodies and rights groups which had been quick to assume a political motive behind the murder.

"In just three days, I've read monstrous things about Bulgaria. None of them true," he told the news conference.

European Commission vice president Frans Timmermans had been among the first to suspect a political motive.

"Shocked by the horrendous murder of Victoria Marinova. Again a courageous journalist falls in the fight for truth and against corruption," he tweeted Sunday, not long after the news of the murder broke.

And the UN's cultural agency, UNESCO, similarly said that "attacks on journalists erode the fundamental human right to freedom of expression and its corollaries, press freedom and free access to information."

Bulgaria is regarded as a laggard in the EU in terms of press freedom, ranking 111th out of 180 countries, according to Reporters Without Borders (RSF).

Widespread corruption, shady media ownership and suspected collusion between journalists, politicians and oligarchs have made objective reporting a constant obstacle course, according to RSF.

The Bulgaria-based Association of European Journalists said reporters from small regional and local media are under particular pressure and even face threats from local businessmen and politicians, often leading to self-censorship.

But a number of experts in Bulgaria were more sceptical about a political motive, arguing that Marinova was not an investigative journalist and the way the killing was carried out did not fit in with such a scenario.

Violence against women has also been widespread in Bulgaria and the Bulgarian Helsinki Committee rights group said 19 women have already been killed in the country so far this year as a result of abuse.

Several hundred people, many in tears, attended a vigil in Ruse on Monday, lighting candles and laying flowers in front of a portrait of Marinova. A similar tribute was held in Sofia.