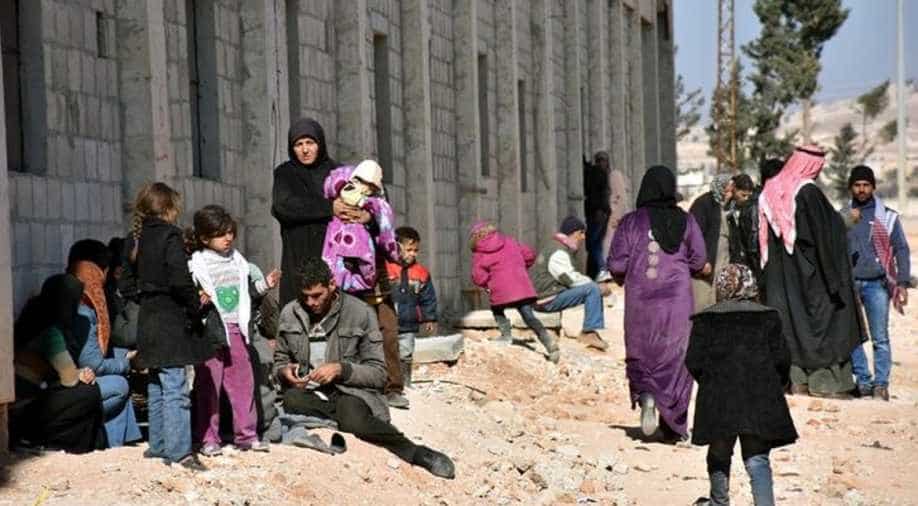 'People are sleeping in the streets. They don't have anything to eat or drink,' said Al-Leith. The rebels have steadily lost territory since Russia intervened to bolster President Bashar al-Assad in September 2015. Photograph:( Reuters )

Syria's rebels lost all of the northern neighbourhoods of their stronghold in east Aleppo on Monday, as the army made significant advances in its offensive to recapture the entire city.

The regime gains have prompted an exodus of thousands of desperate civilians, some fleeing to districts held by the government or Kurdish forces, others heading south into areas still under opposition control.

"The situation is disastrous," said Ibrahim Abu Al-Leith, a spokesman for the White Helmets rescue group in the Ansari neighbourhood.

"There is mass displacement and morale is in the gutter," he said, his voice cracking with emotion.

"People are sleeping in the streets. They don't have anything to eat or drink, but neither do we," he told AFP.

The loss of eastern Aleppo would be a potentially devastating blow to Syria's rebels, who seized the area in 2012.

The opposition has steadily lost territory since Russia intervened to bolster President Bashar al-Assad in September 2015.

"This is their (the rebels') worst defeat since they seized half the city in 2012," Observatory director Rami Abdel Rahman said.

The advances left all of northeast Aleppo under government control.

Syria's White Helmets warned on Monday they had no more fuel reserves for rescue vehicles.

In a video statement, the group urged "all humanitarian, aid, and medical organisations to immediately intervene to put an end to the humanitarian disaster" facing civilians in besieged Aleppo.

Nearly 10,000 civilians have fled the east, the Observatory said late Sunday, with about 6,000 moving to the Kurdish-held Sheikh Maqsud neighbourhood and 4,000 to government-held west Aleppo.

Syria's Kurds are officially aligned with neither the government nor the rebels, but the opposition views them as effectively allied with the regime in its efforts to recapture Aleppo.

Hundreds of civilians were also fleeing south to the remaining rebel-held districts with little more than the clothes they wore, an AFP correspondent said.

People in southern neighbourhoods were donating blankets and other items to the new arrivals, who had travelled on foot, exhausted, cold and hungry.

The United Nations said it was "deeply concerned" about civilians in the east, where international aid is exhausted and food stocks are desperately low.

The UN has appealed for access to the east many times, but has failed to secure the necessary guarantees to enable aid deliveries.

"In terms of east Aleppo, we just need the green light from the people who control the roads going in because, as you know, the east of Aleppo is besieged," Ramesh Rajasingham, the UN's deputy regional humanitarian coordinator for the Syria crisis, told AFP.

The government advances mean the regime now controls at least a third of eastern Aleppo, just under two weeks into its renewed bid to recapture the city.

State television said the army had captured the key Suleiman al-Halabi pumping station, which controls water supplies to government-held west Aleppo and has periodically been shut by rebels.

The government assault of heavy air strikes, barrel bomb attacks and artillery fire has killed at least 235 civilians, including 27 children, in east Aleppo, according to the Observatory.

Rebel fire into the government-held west has also killed at least 27 civilians, among them 11 children, since November 15, it says.

Syria's Al-Watan daily, which is close to the government, said the next stage would be "to divide the remaining (rebel-held) area into... districts that will be easily controlled and to capture them successively".

But British Foreign Secretary Boris Johnson called for an immediate ceasefire in Aleppo, saying the assault "is threatening a humanitarian catastrophe".

More than 300,000 people have been killed and millions displaced since the conflict began with anti-government protests in March 2011.

Syria's deputy foreign minister on Monday denounced accusations by "western" countries that it has used chemical weapons in the conflict as "a campaign of lies".

Faisal Muqdad was speaking at the annual conference in The Hague of countries belonging to the Chemical Weapons Convention.