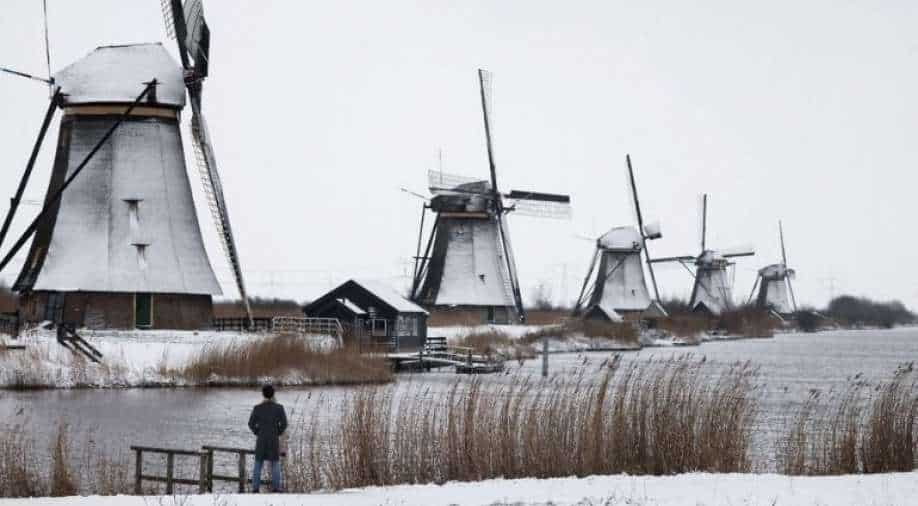 Snow had stopped falling after the country was hit by the first major snowstorm in a decade on Sunday, dubbed Storm Darcy, but the Netherlands remained under weather alerts

The Netherlands remained gripped by snow and freezing temperatures Monday, shuttering several schools that were due to reopen after a seven-week closure and closing some coronavirus test and vaccination sites.

Snow had stopped falling after the country was hit by the first major snowstorm in a decade on Sunday, dubbed Storm Darcy, but the Netherlands remained under weather alerts.

Coronavirus test and vaccination locations in at least eight towns including Haarlem, Alphen aan den Rijn and Den Helder were staying shut because of the wintry conditions, the GGD public health service said.

Primary schools across the country that were closed in early December as part of the Netherlands' toughest coronavirus restrictions since the start of the pandemic were meanwhile allowed to reopen on Monday.

But dozens of schools in the capital Amsterdam, the port city of Rotterdam, Utrecht and other locations were staying shut, mainly because of transport difficulties for pupils and staff, public broadcaster NOS said.

Trains were slowly getting back to normal, but road traffic remained disrupted, with part of the A1 motorway from Apeldoor to Amersfoort closed due to snow and ice.

The Dutch infrastructure agency reported 450 accidents since the weekend.

The sub-zero conditions are set to grip the Netherlands into next week, with daytime temperatures of minus 6 degrees Celsius (21.2 Fahrenheit) and falling as low as minus 11 degrees Celsius at night.

The big freeze has raised hopes that the Netherlands' famed canals will ice over in some places by around Thursday, allowing people to go ice-skating, a national obsession.

Dutch media reported that many shops had already sold out of skates in anticipation of the first such chance to take to the ice since 2018.

If the icy conditions continue, it could raise pressure on authorities to allow a traditional 200-kilometre (125-mile) ice-skating marathon through 11 cities called the Elfstedentocht to be held for the first time since 1997.

Dutch authorities have so far ruled it out even if the conditions are right, because of the risk of coronavirus transmission if crowds gather to watch.

Storm Darcy, which also caused transport disruption in Germany, was now heading across the North Sea towards Britain.