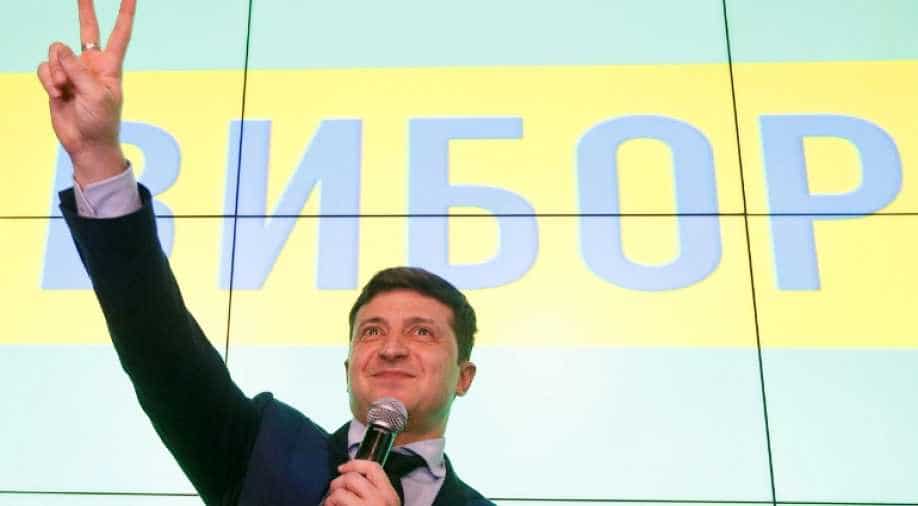 A comedian tipped to take over Ukraine's presidency and his incumbent rival went head-to-head in a bitter stadium debate Friday, as campaigning reached its grand finale before a weekend vote.

The showman's bid started as a long shot but he leapfrogged establishment candidates amid frustration over corruption, economic trouble and a conflict with Moscow-backed insurgents in the country's east.

Several thousand spectators attended the first and only policy head-to-head of the extraordinary campaign that took place in Kiev's Olympic Stadium amid beefed-up security.

The rivals appeared together on stage and opened the debate on a positive note by shaking hands before quickly launching mutual attacks.

"I am not a politician," said Zelensky, who spoke first. "I am just a simple person who has come to break down this system," he said.

"I am the result of your mistakes and promises."

53-year-old Poroshenko attacked the inexperience of the untested Zelensky, questioning his ability to serve as commander-in-chief.

"We only have a beautiful and bright sweet wrapper in which everyone can find what he is looking for," said an emotional Poroshenko.

He said Zelensky had over the past few years avoided active-duty military service and added he would not be able to stand up to Russian President Vladimir Putin.

The debate brought to a close a race that at times descended into farce as the candidates exchanged insults and underwent drug tests at Zelensky's insistence.

A survey by the Rating pollster released Thursday showed Zelensky winning 73 per cent of the vote against 27 per cent for Poroshenko.

Supporters credit Poroshenko -- who took power after a popular uprising in 2014 -- with implementing economic reforms, rebuilding the army, securing an Orthodox Church independent of Russia and winning visa-free travel to Europe.

However, he won just over half of Zelensky's vote share in the first round of the election last month.

The stakes are high for the country of 45 million people seen as a buffer between the European Union and Russia.

Ukraine is mired in a smouldering war with Moscow-backed separatists in the industrial east, a conflict that has claimed 13,000 lives.

A parliamentary election is also due to be held in October.

Kremlin spokesman Dmitry Peskov said earlier Friday his team would record the debate so that Putin could watch when he is free.

"We will watch it for sure," he said.

In a new attempt to squeeze Kiev, Moscow announced Thursday it would be limiting Russian exports of coal, oil and petrochemicals that Ukraine relies on.

The West is closely watching the race amid concern that a new government might undo years of reforms.

The main risks associated with a Zelensky presidency are "policy incoherence stemming from inexperience" and "undue influence from oligarchs or Russians," a former Western diplomat told AFP.

In a startling development on Thursday, a Kiev court ruled that the Poroshenko government's 2016 decision to nationalise the country's biggest lender as part of a reform drive was illegal.

PrivatBank was owned at the time by Igor Kolomoysky, a tycoon who controls the channel that broadcasts several of Zelensky's shows.

Poroshenko warned that Ukraine risked defaulting on its debt if the bank were handed back to the tycoon after his government spent nearly $6 billion on recapitalising the lender.

The EU, the United States and the IMF said in coordinated statements they were closely monitoring the situation.