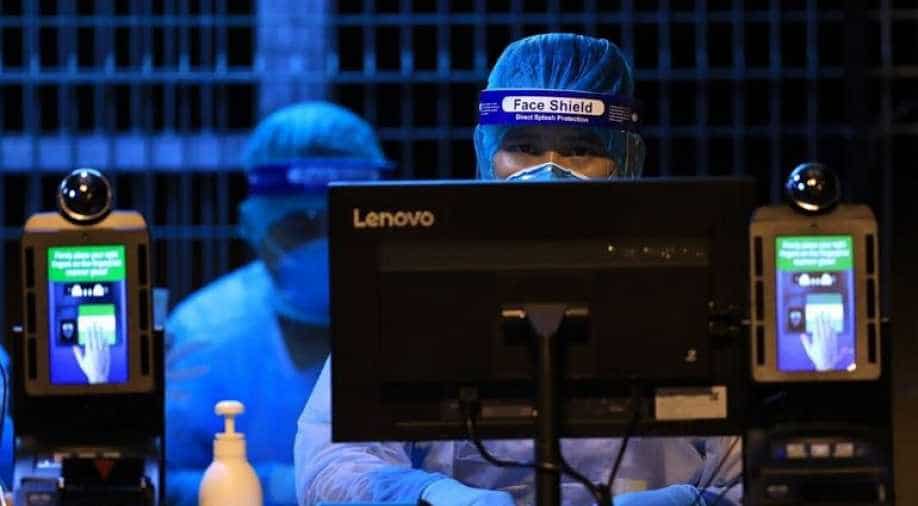 More than 74,000 people have been infected by the new coronavirus in China, and hundreds more in over 25 countries.

China on Thursday touted a big drop in new virus infections as proof its epidemic control efforts are working, but the toll grew abroad with deaths in Japan and South Korea.

Fatalities in China hit 2,118 as 114 more people died, but health officials reported the lowest number of new cases in nearly a month, including in hardest-hit Hubei province.

More than 74,000 people have been infected by the new coronavirus in China, and hundreds more in over 25 countries.

The number of deaths outside mainland China climbed to 11.

Also read: Get our children from China within three-days, else we'll hold demonstration: Angry parents issue ultimatum to Pak govt

Japan's toll rose to three as a man and a woman in their 80s who had been aboard a quarantined cruise ship died, while fears there mounted about other passengers who disembarked the Diamond Princess after testing negative.

South Korea reported its first death, and the number of infections in the country nearly doubled Thursday to 104 -- including 15 at a hospital in Cheongdo county.

The mayor of Daegu -- South Korea's fourth-largest, with 2.5 million people -- advised residents to stay indoors, while commanders at a major US military base in the area restricted access.

Iran reported two deaths on Wednesday, the first in the Middle East. Deaths have previously been confirmed in France, the Philippines, Taiwan and Hong Kong.

Chinese officials say their drastic containment efforts, including quarantining tens of millions of people in Hubei and restricting movements in cities nationwide, have started to pay off.

"Results show that our control efforts are working," Foreign Minister Wang Yi said at a special meeting on the virus with Southeast Asian counterparts in Laos, citing the latest data.

Wang said the situation was "significantly improving" in Hubei and Wuhan, but an official in a central government team dealing with the epidemic said it was still "very severe".

Although more than 600 new infections were reported in Hubei's capital Wuhan, it was the lowest daily tally since late January and well down from the 1,749 new cases the day before.

The national figure has now fallen for three straight days.

Chinese authorities placed the city of 11 million under quarantine on January 23 and quickly locked down the rest of the province in the days that followed.

Wuhan authorities this week carried out a three-day, door-to-door check on residents, with the local Communist Party chief warning that officials would be "held accountable" if any infections were missed.

Cities far from the epicentre have limited the number of people who can leave their homes for groceries, while rural villages have sealed off access to outsiders.

Richard Brennan, a World Health Organization official, said in Cairo that China was making "tremendous progress" and "trends are very encouraging, but we are not at a turning point yet".

While China has boasted progress in its fight against the COVID-19 epidemic, Japan's government has been criticised for the quarantine measures it placed on the Diamond Princess.

The huge vessel moored in Yokohama is easily the biggest coronavirus cluster outside the Chinese epicentre, with 634 cases confirmed among passengers and crew.

Another 13 people on board the ship were diagnosed with the virus Thursday, Japan's health ministry said.

Still, passengers were disembarking after negative tests and having completed a 14-day quarantine period -- packing into yellow buses and leaving for stations and airports.

Questions were asked over the wisdom of allowing them to mingle in Japan's crowded cities.

"Is it really safe to get off?" screamed a headline in the Nikkan Sports tabloid.

The paper quoted one passenger who said he was tested on February 15, but only left four days later.

"I thought I could be infected during the four days. I thought 'Is it really OK'?"

A specialist in infectious diseases at Kobe University slammed as "completely chaotic" the quarantine procedures on board in rare criticism from a Japanese academic.

"The cruise ship was completely inadequate in terms of infection control," said Kentaro Iwata in videos he has since deleted.

South Korea, meanwhile, announced 51 new cases, with more than 40 in a cluster centred on the Shincheonji Church of Jesus, an entity often accused of being a cult.

The infections apparently came from a 61-year-old woman who first developed a fever on February 10 and attended at least four services before being diagnosed.

Local media said she had twice refused to be tested for the coronavirus on the grounds she had not recently travelled abroad.

Authorities were investigating whether she might have visited the hospital where a long-term patient contracted the virus and later died. Some 15 other patients have now been found to have the virus.

Shincheonji claims its founder, Lee Man-hee, has donned the mantle of Jesus Christ and will take 144,000 people with him to heaven on the day of judgement.

A man in his 60s tested positive for the coronavirus after dying Wednesday following symptoms of pneumonia, South Korean authorities said.