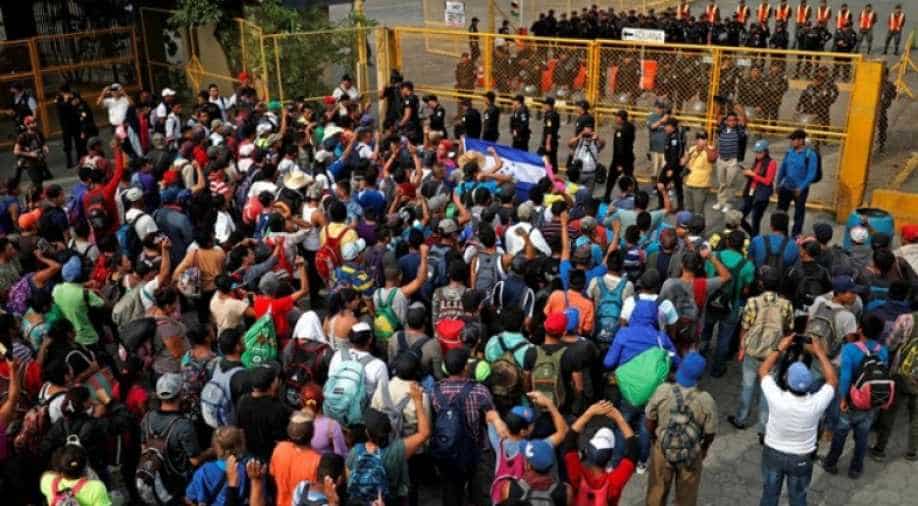 Central Americans, part of a caravan trying to reach the US stand by the border gate in hope to cross into Mexico and carry on their journey. Photograph:( Reuters )

The group of some 5,500 people, most of them Hondurans, began arriving in the Mexican capital on Sunday.

The US-bound migrant caravan that has so thoroughly irked President Donald Trump has decided to resume its trek north after resting in Mexico City for nearly a week and failing to secure buses for the journey.

In a sports arena turned into a makeshift shelter, a vote was held Thursday mainly among male travellers and the verdict was to keep going and leave at dawn on Friday.

The group of some 5,500 people, most of them Hondurans, began arriving in the Mexican capital on Sunday.

They have been travelling since October 13, mainly on foot, and covered more than 940 miles (1,500 km), but are still weeks away from the US border.

Most of them are fleeing grinding poverty and violence from powerful street gangs.

The migrants have asked Mexican authorities to provide them with transport. On Thursday, some 200 of them demonstrated outside the local office of the UN High Commissioner for Refugees to press for 150 buses.

On some stretches of the trip, some of the migrants have been riding on trucks.

However, one person fell off and died when the group was in Chiapas state in the south.

Since then, Mexican police accompanying the caravan have barred the travellers from hanging off the side of such trucks.

Two other caravans with about 2,000 people each are making their way through southern Mexico.

Trump made immigration a central issue ahead of Tuesday's midterm elections, using it to fire up his largely white, conservative base.

The vote was seen as a referendum on his presidency so far.

In the end, Trump's Republicans kept their majority in the Senate but lost the House of Representatives to the Democrats.

Calling the caravan a "national emergency," Trump has threatened to deploy as many as 15,000 troops to the border with Mexico. Some 4,800 had been deployed as of Monday, the Pentagon said.