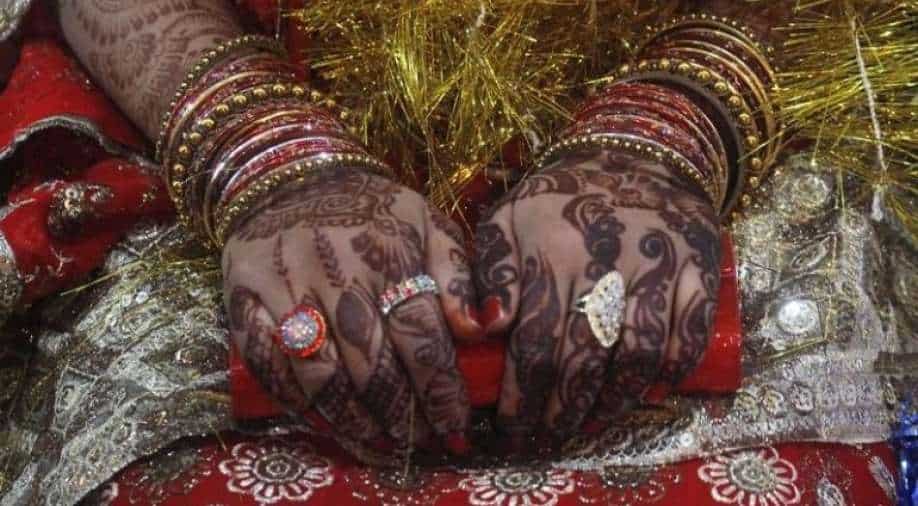 'People think this is often something that just happens in developing countries. It doesn't. It's happening right here ... it has to stop,' former chancellor Sajid Javid said before presenting the bill aimed at ending child marriage through the backdoor in UK

Ahead of the introduction of a bill raising the minimum age of marriage in the UK to 18, lawmakers said that Britain must scrap the legal loophole that allows child marriage "by the back door".

Introduced in 1929, the current law in the UK allows marriage at the age of 16, provided there is parental consent. According to the lawmakers, this has not only sabotaged girls' futures but has also condoned child abuse.

According to campaign groups, the loophole also undermines Britain's global efforts to end child marriage in other countries.

"Child marriage is child abuse," former chancellor Sajid Javid told BBC radio before presenting the bill, which has cross-party support. "People think this is often something that just happens in developing countries. It doesn't. It's happening right here ... it has to stop."

He also reported that thousands of minors had been coerced into marriages in Britain in the last decade.

Meanwhile, the government has also said it is committed to lifting the minimum age to 18.

One of the campaigners, Payzee Mahmod, who also had an early marriage at the age of 16 says that "it's a big step in the right direction. We're celebrating this moment."

Campaigners are fighting against dreadful situations where girls are pulled out of school and often subjected to marital rape and domestic abuse in the name of early marriage, he added.

In 1929, the current law set the minimum age at 16 because back then, living together out of wedlock was socially unacceptable, so marriage was seen as a socially acceptable way out.

Today, relationships outside marriage are still often considered shameful by the people belonging to South Asian and Middle Eastern backgrounds, which is why girls from these communities are seen to be most at risk of early marriage in Britain.

Campaigners against the 1929 law say that nowadays most girls who marry under 18 are pressured into it by their families and that raising the minimum age would empower them to say no and fight for their rights.

They also assert that it was crucial not only to put an end to the loophole but to make it a criminal offence to assist any underage marriage, including religious marriages and those conducted abroad.

Parliamentarian Pauline Latham, one of the bill's sponsors, said the current law permitted child marriage "by the back door".

"I've spoken to a lot of ministers to say we cannot let this continue, and they've agreed. Boris is keen to get it through," she added, referring to the prime minister.

Spearheaded by Latham, an attempt was made to amend the law last year, but it was foiled by the pandemic. However, campaigners said they are confident that the legislation, which applies to England and Wales, would pass by next spring.

According to official data, between 2008 and 2017 more than 2,740 under-18s were married in England and Wales. Notably, this figure doesn’t include those minors who were wed in traditional ceremonies or were taken abroad to marry.

Talking about how marriages between the ages of 13 and 15 were not uncommon, Karma Nirvana, a British human rights charity that campaigns against forced marriage, reports that it had also come across cases involving children as young as 11.

"Criminalisation is a strong deterrent and necessary to protect every child from all forms of child marriage in all settings," said Mahmod, whose sister Banaz was killed by family members after leaving a husband they had chosen for her at 17.