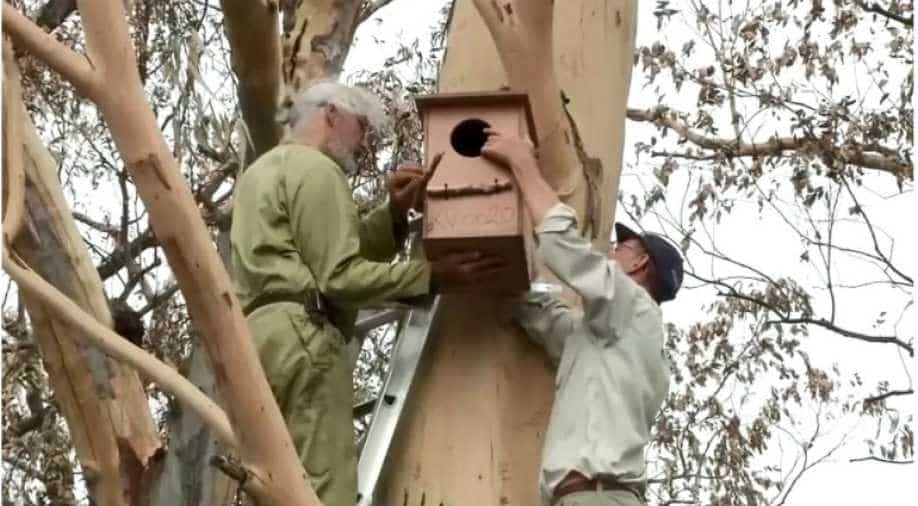 Shelter homes getting installed for animals in Australia Photograph:( Reuters )

In Kangaroo Valley, locals and visitors are helping in installing possum nest boxes in affected areas to provide animals a place to live after their homes were destroyed by fires.

After rains are trying to assuage bushfires that caused immense damage in Australia, volunteers are setting up shelters for homeless animals.

In Kangaroo Valley, a popular tourist town located nearly 150 kilometres from Sydney, locals and visitors are helping in installing possum nest boxes in affected areas to provide animals a place to live after their homes were destroyed by fires.

"It's heartbreaking for the people, absolutely heartbreaking," said Anne Claassens, a Sydney resident who along with her husband is moving around the fire-affected areas in the weekends to provide animals with food stock and shelter.

The couple said that they were devastated when they got to know that animals in the wild were getting killed because of the raging fires.

In pics: The struggles of Australian wildlife to survive as bushfires rage

"We don't have the money but we have a lot of brain and heart to put to this, so that's what we are doing," said Ron Claassens.

"It just has to be continuous, till the forest regenerate, and the animals have a home to go to," Ron added.

At least 29 people and millions of animals were killed in the wildfires that destroyed more than 11.2 million hectares (27.7 million acres) of the area in Australia.

Jane Rowe, the organiser of Kangaroo Valley Wildlife Initiative, a group of volunteers who have come together after fires passed, hoped the government would take swift action to help the vulnerable native animals.

The federal government also launched an A$50 million emergency wildlife recovery program aiming at the survival of the iconic native animal.