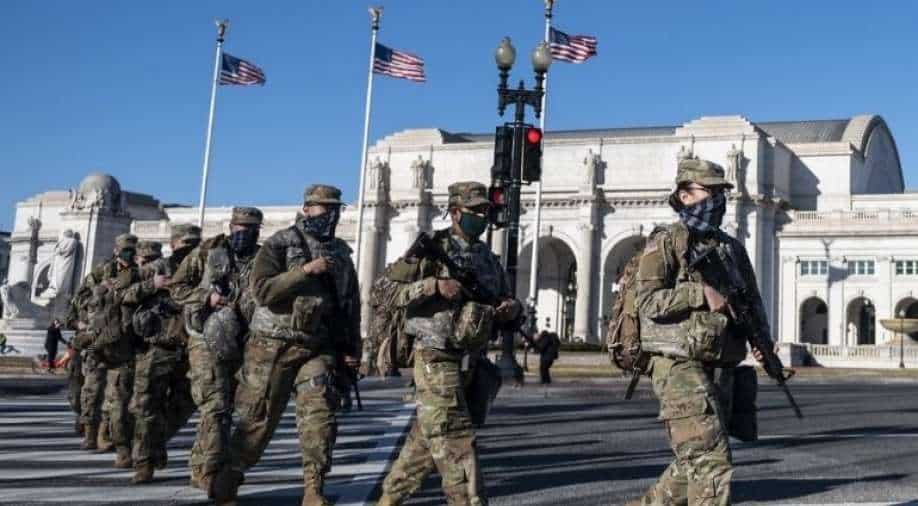 Members of the US National Guard walk outside of Union Station as they deploy to the US Capitol on January 19, 2021 in Washington, DC, ahead of the 59th inaugural ceremony for President-elect Joe Biden and Vice President-elect Kamala Harris Photograph:( AFP )

Twelve US National Guard troops have been pulled from duty protecting the presidential inauguration of Joe Biden, partly due to an investigation of extremist sympathies in the ranks, the Pentagon said Tuesday.

"We are, out of an abundance of caution, taking action and immediately removing them from the line of duty at the Capitol and the events taking place," said Pentagon spokesman Jonathan Hoffman.

Two of the 12 were removed from duty for making "inappropriate comments or texts," said National Guard Commander General Daniel Hokanson.

The two were sent home, he said, declining to explain what was said in the comments.

They were pulled from the force "out of an abundance of caution," he said.

The removal of the other 10 troops was also unexplained, but was "unrelated to the events taking place at the Capitol or to the concerns that many people have noted on extremism," said Pentagon spokesman Jonathan Hoffman.

The actions against the 12 came amid concerns that the far-right extremists who took a part in the assault on the US Capitol on January 6 have associates or sympathisers in the US military.

Concerned about a possible threat to Biden or others, the FBI has investigated whether there were extremists among the up 25,000 National Guard troops being deployed in Washington to keep security for the inauguration.

We "want to make sure that we have the right people in the security bubble," General William Walker, head of the Washington National Guard, told Fox News on Monday.