'Selfie' star mountain gorilla dies in the arms of his caretaker; Twitter weeps 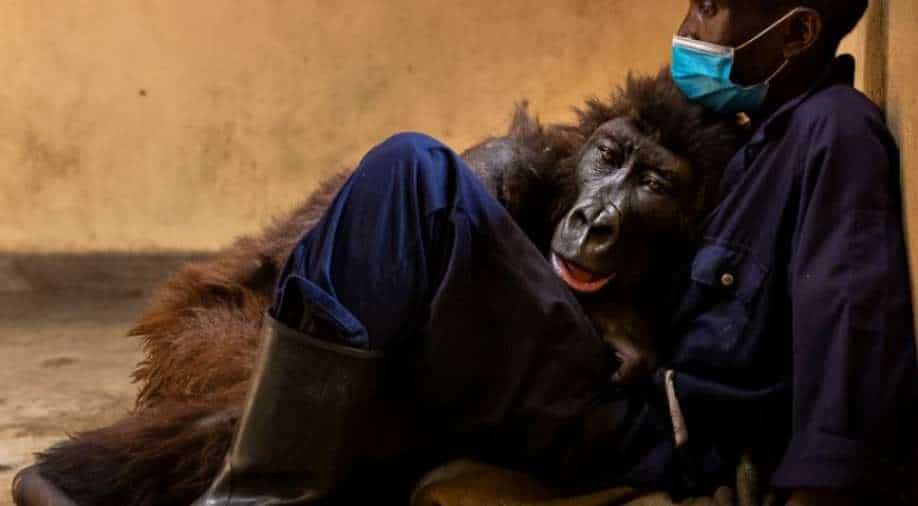 The orphaned gorilla named Ndakasi was found by rangers in 2007 after her mother was reportedly killed by militias.

A mountain gorilla died in the arms of his caretaker in the Democratic Republic of Congo as the park officials released the emotional picture.

The orphaned gorilla named Ndakasi was found by rangers in 2007 after her mother was reportedly killed by militias. The struggling infant at the time was rescued by the rangers and later sent to a shelter where her caretaker Andre Bauma took her.

Ndakasi slowly recovered as Bauma, 49, took care of her. However, she wasn't returned to the wild reportedly due to the traumatic events she had witnessed as an infant.

It is with heartfelt sadness that Virunga announces the death of beloved orphaned mountain gorilla, Ndakasi.

Ndakasi lived peacefully with other orphaned gorillas at Senkwekwe centre under the watchful eyes of Bauma.

She was however no ordinary gorilla as one of her "selfies" along with her another gorilla Ndeze went viral on Earth Day two years ago.

You might have recently seen caretakers Mathieu and Patrick’s amazing #selfie with female orphaned gorillas Ndakazi and Ndeze inside the Senkwekwe center here at Virunga. Is it real? Yes! Are these gorilla gals always this cheeky? Yes! #gorillaselfie pic.twitter.com/jINBr8HXx7

The Senkwekwe centre said Ndakasi died after "prolonged illness in which her condition rapidly deteriorated".

Bauma who was tormented at losing his favourite friend said, "It was a privilege to support and care for such a loving creature, especially knowing the trauma Ndakasi suffered."

Several users on the internet sent their heartfelt condolences at the sad demise of the beloved gorilla.

Ndakasi, the orphaned gorilla who went viral for this incredible selfie in 2019, has died in the arms of her caretaker. R.I.P. 💔 pic.twitter.com/Nx2GBumNVJ

Ndakasi, an endangered mountain gorilla at DRC's Virunga Park who appeared in ranger Andre Bauma's world-famous 2007 selfie, has died of illness at age 14, in the arms of her ranger friend Bauma. RIP Ndakasi. Thank you for your service and memories, Andre. pic.twitter.com/aerdjPMuVo

Bauma recalled Ndakasi's "sweet nature" and "intelligence" adding that she helped him to understand the "connection between humans and the great Apes".

The emotional caretaker said he was "proud to have called Ndakasi my friend" while adding that he "loved her like a child".