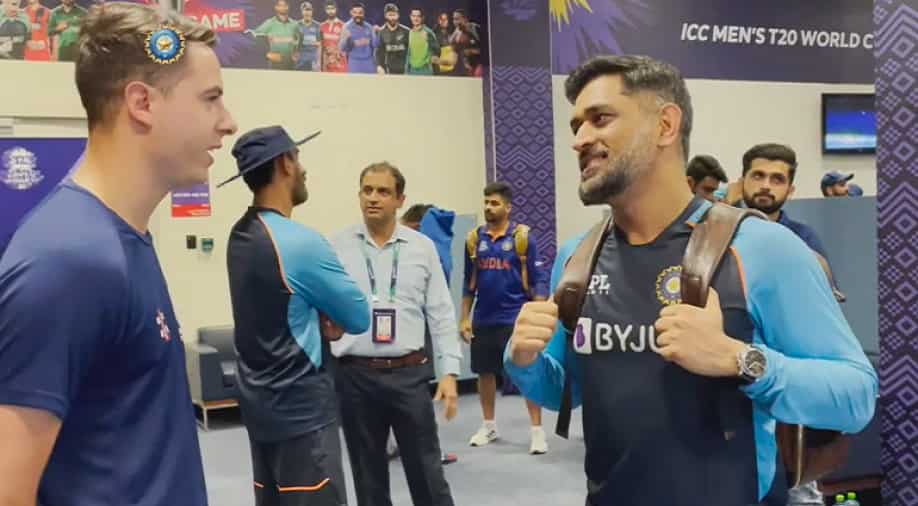 Scotland players expressed a desire to visit the Indian dressing room post their game against Virat Kohli & Co. in the T20 World Cup 2021 on Friday.

India thrashed Scotland by eight wickets in their penultimate Super 12 clash of the T20 World Cup 2021 on Friday (November 05) to keep their semi-final hopes alive in the tournament. India produced a dominant performance with the bat and the ball to register an emphatic victory and massively improve their net run-rate to remain in the race for a top-two finish in Group 2.

Indian bowlers wreaked havoc on the Scottish batting line-up after the Kyle Coetzer-led side were asked to bat first at the Dubai International Stadium in Dubai on Friday. Ravindra Jadeja and Mohammed Shami picked up three wickets apiece as Scotland were bundled out cheaply for a paltry 85.

In reply, Indian openers KL Rahul and Rohit Sharma went bonkers in the run-chase as they help the team chase down the target in just 39 balls. Rahul smashed 50 off 19 balls laced with three sixes and six fours while Rohit scored a quickfire 30 off 16 balls with the help of five fours and a solitary six. India won the game comprehensively with as many as 13.3 overs to spare.

Post the game, Scotland players requested to visit the Indian dressing room and the Indian players obliged. It was a great gesture from the Indian stars to acknowledge and appreciate the Scotland players, who looked excited to meet and chat with some of the best cricketers in the world.

The likes of MS Dhoni, who is the mentor of the team for the tournament, Virat Kohli, Rohit Sharma, Jasprit Bumrah, KL Rahul, R Ashwin and Hardik Pandya among others were seen sharing their experiences with the Scotland players. BCCI shared a video of the Scotland players visiting the Indian dressing room on their official Twitter handle.

MUST WATCH: #SpiritOfCricket was at its best as Scotland expressed their wish to visit the #TeamIndia dressing room & our boys made them feel at home - By @Moulinparikh

India have now registered two back-to-back dominant victories against Afghanistan and Scotland respectively but their hopes of finishing in the top two in Group 2 depend on the fate of the Afghanistan-New Zealand game. If New Zealand manage to beat Afghanistan they will move to eight points and will finish second to qualify for the semi-finals.

However, if Afghanistan manage to beat New Zealand, India will have to win by a big margin in their last game against Namibia to make it to the next round.