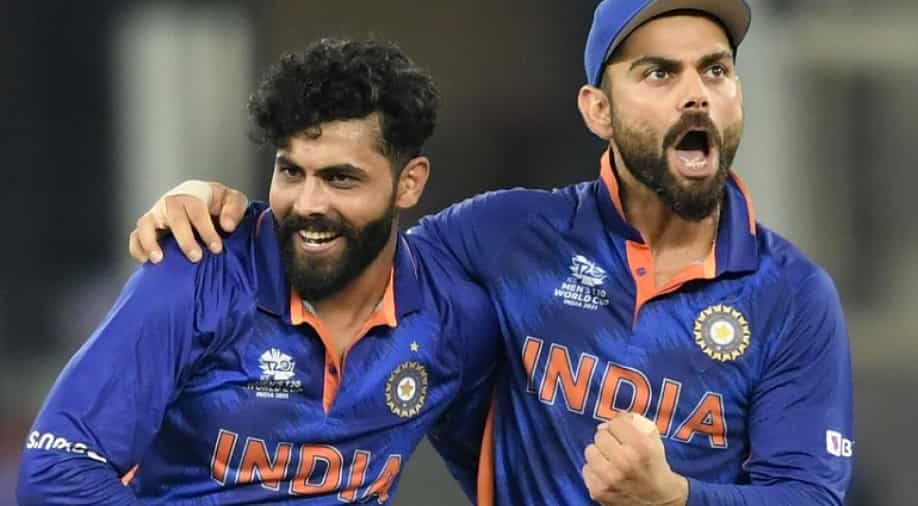 India all-rounder Ravindra Jadeja came up with a cheeky response after a reporter asked him a question about the Afghanistan-New Zealand game in the T20 World Cup 2021.

India's hopes of making it to the semi-final of the T20 World Cup 2021 rests on the fate of Aghanistan's final Super 12 clash against New Zealand in Abu Dhabi on Sunday (November 07). If Afghanistan lose against New Zealand, India will be out of the race for the semis even before they take the field in their last Super 12 game against Namibia on Monday.

The equation is a tricky one for India as they will depend on the result of the Afghanistan-New Zealand game to salvage their chance of finishing in the top two in their group. If Afghanistan beat New Zealand, India will have to ensure they defeat Namibia by a big margin to keep their net run rate better than Afghanistan to finish second behind top-ranked Pakistan.

India thrashed Scotland by 8 wickets in their penultimate group stage game on Friday to keep their top-four hopes alive. India bundled out the minnows for a paltry 85 and chased down the target in just 39 balls to get their net run rate above Afghanistan and New Zealand. India now have two wins in a row and will be hoping for Afghanistan to hand them a lifeline in the tournament.

After India's dominant 8-wicket win against Scotland on Friday, all-rounder Ravindra Jadeja came up with a cheeky response to a reporter's question about the Afghanistan-New Zealand game. The journalist had asked Jadeja what will the Indian team do if New Zealand beat Afghanistan?

Afghanistan have so far registered big wins against Scotland and Namibia but lost against Pakistan and India. They did give Pakistan a close fight and almost pulled off a win before Asif Ali's cameo took the game away from them.

The Mohammad Nabi-led side will be hoping to beat New Zealand which will not only keep India in the tournament but also give Afghanistan a chance to become the second team from the Group 2 to qualify for the semifinals.