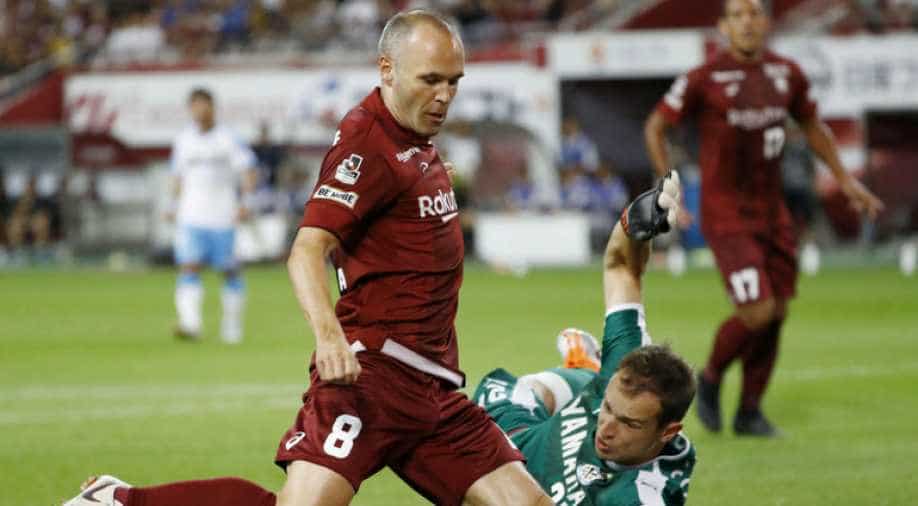 Andres Iniesta of Spain scores his first goal for Vissel Kobe during their J-League soccer match against Jubilo Iwata. Photograph:(Reuters)
Follow Us

Spanish football legend Andres Iniesta celebrated his 37th birthday on Tuesday by signing a contract extension that will keep him at J-League side Vissel Kobe for two more years.

Spanish football legend Andres Iniesta celebrated his 37th birthday on Tuesday by signing a contract extension that will keep him at J-League side Vissel Kobe for two more years.

The former Barcelona midfield maestro joined Kobe in 2018 in a deal worth a reported $30 million a year and recently recovered from a serious thigh injury.

"I will continue on my quest to make Vissel Kobe a stronger club," said the World Cup-winning midfielder, speaking through a Japanese translator.

"I am determined to contribute as much as possible to bring this team to a higher level," he added sitting alongside Kobe's tech-billionaire owner Hiroshi Mikitani.

Iniesta's debut at Kobe in July 2018 ended with an embarrassing home defeat, but he helped lead the team to their first Japanese Super Cup title in 2020.

Iniesta has enjoyed huge popularity in Japan with analysts estimating he has generated more than $100 million in ticket sales and merchandising revenue. He has appeared in TV commercials for Japanese sake and mobile phone services.

Named Kobe's captain in April 2019 after a shake-up at the club, Iniesta was sidelined for several months after he suffered a ruptured tendon in his right thigh last December.

Following surgery in Barcelona, he was back training in April before returning to action in the J-League this month.

Widely considered one of the most gifted midfielders of all time, he scored the winning goal as Spain won the 2010 World Cup in South Africa, and he was a key member of the European Championship-winning side's of 2008 and 2012.

Iniesta was the driving force behind four Champions League wins with Barcelona and helped the Catalan club secure domestic trebles in 2009 and 2015.

He also won nine La Liga titles, two European Super Cups and three FIFA Club World Cups, leaving Barcelona as the most decorated Spanish player of all time, with more than 30 trophies for club and country.

His decision to join Kobe after 22 years at Barcelona, 16 of them as a first team player, was seen as a coup for Japanese football, which had been struggling to attract big names tempted by cash-rich Chinese clubs in the twilight of their careers.

Kobe owner Mikitani said Iniesta's decision to stay will help the team's ambition to be the top club in Asia while elevating the standard of football in Japan.

Iniesta "has not just improved Vissel's status, but he has improved the global recognition of the J-League," Mikitani said.

Iniesta said he wanted to stay engaged with Vissel Kobe once his playing days were over, although he did not say in what capacity.