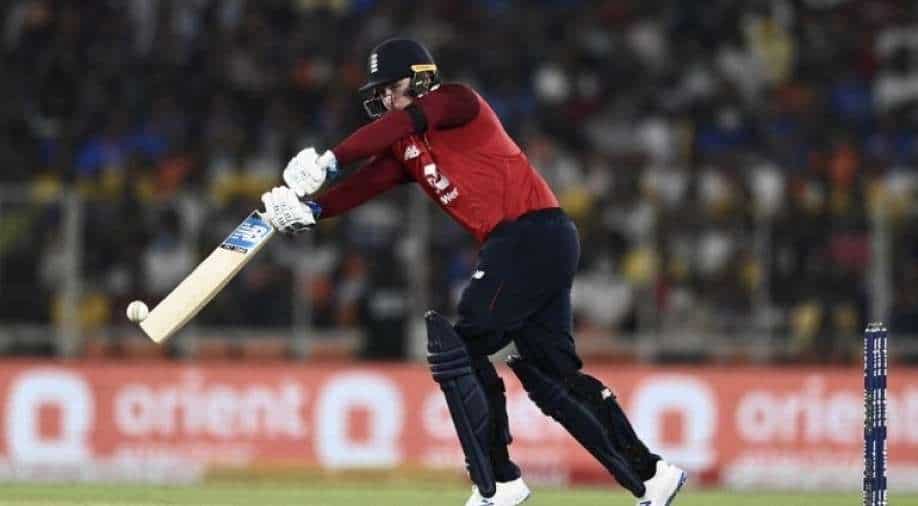 England's Jason Roy plays a shot during the first Twenty20 international cricket match between India and England at the Narendra Modi Stadium in Motera on March 12, 2021. Photograph:( AFP )

Chasing a modest 125, Roy hit a confident 49 as England romped home in 15.3 overs to take a 1-0 lead in the five-match series at the world's biggest cricket stadium in Ahmedabad

Jason Roy and Jofra Archer played the lead roles as England thrashed India by eight wickets in the opening Twenty20 interntional on Friday.

Chasing a modest 125, Roy hit a confident 49 as England romped home in 15.3 overs to take a 1-0 lead in the five-match series at the world's biggest cricket stadium in Ahmedabad.

Roy and Jos Buttler put on 72 in a blazing opening stand.

Buttler fell lbw to leg-spinner Yuzvendra Chahal for 28 and Roy, who hit four fours and three sixes, fell one short of a half century when Washington Sundar trapped him lbw.

"I'll take 49 and a comfortable victory for the team any day," said Roy, who did not take part in the Test series in which England were hammered 3-1.

Dawid Malan finished on 24, including the six that won the game, and Jonny Bairstow, scored 26 off 17 balls.

The pair put on an unbroken stand of 41 to steer England to victory after Archer took 3-23 in a fiery opening attack on the Indian batters.

Captain Eoin Morgan won the toss, fielded first and India slipped to 48-4 with skipper Virat Kohli out for nought off leg-spinner Adil Rashid.

Kohli blamed a "below par batting performance" by his side.

"There was a lack of execution of some of the shots. We have to come back with much more intent and clarity of plan. The wicket did not allow you to play the kind of shots you wanted to," he added.

Wicketkeeper-batsman Rishabh Pant reverse hit Archer for a six behind the stumps, but he fell to Ben Stokes for 21.

Shreyas Iyer scored his third T20 fifty and put on 54 for the fifth wicket with Hardik Pandya, who smashed 19, to boost the Indian total.