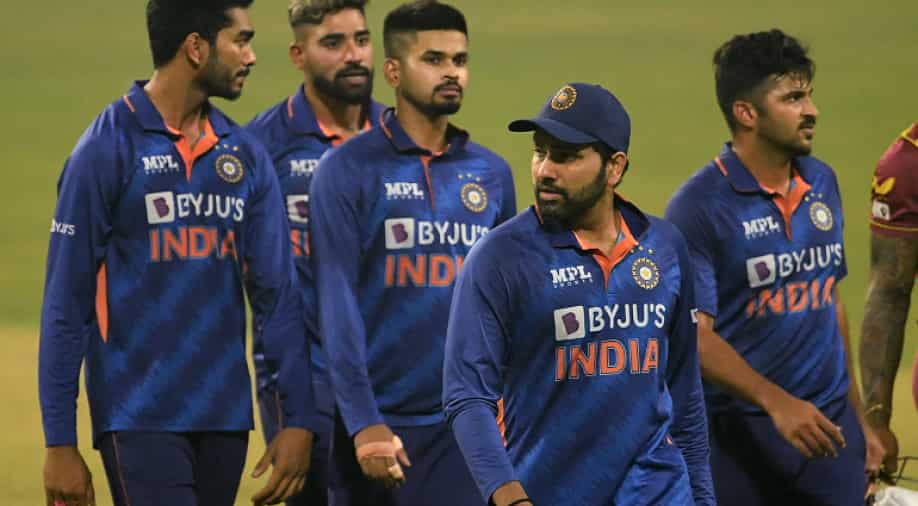 Rohit Sharma achieved a new milestone in captaincy as India completed a 3-0 whitewash against West Indies in the recently-concluded T20I series.

India continued their dominant run against West Indies in the third and final T20I on Sunday as they thrashed the visitors by 17 runs at the Eden Gardens in Kolkata to complete a 3-0 whitewash in the T20I series. It was a brilliant all-round performance from Rohit Sharma & Co., who rode on Suryakumar Yadav's blistering half-century to post a strong total of 185 runs on the board before Harshal Patel's exceptional spell helped them defend it comfortably.

While India have now moved to the top spot in the ICC T20I rankings with back to back clean sweeps in their last two T20I series, captain Rohit has also managed to create a new captaincy record. With the team's 3-0 clean sweep against Kieron Pollard's men, Rohit has become the first Indian captain to lead the side to 3 or more series whitewashes in T20Is.

No Indian captain before the Hitman had managed to achieve the feat in the shortest format of the game. Rohit has led India to series clean sweeps against Sri Lanka (2017), New Zealand (2021) and West Indies (2022). He has become only the third captain in the world after Pakistan Sarfaraz Ahmed (5) and Afghanistan's Asghar Afghan (4) to win three or more T20Is series without losing a single game.

Also Read: Time for Sourav Ganguly to step in: Shastri 'shocked' as Wriddhiman Saha threatened by a journalist

Asked to bat first, India got off to a poor start as opener Ruturaj Gaikwad failed to make an impact and was dismissed cheaply on 4 off 8 balls before Ishan Kishan  (34) combined with Shreyas Iyer (25) to add 53 runs for the second wicket. Skipper Rohit, who demoted himself to no.4 in order to let Gaikwad and Kishan open the innings, also couldn't get going and was dismissed on 7 off 15 deliveries.

While Suryakumar slammed a quickfire 65 off 31 balls laced with seven sixes and a four, Venkatesh scored 35 off 19 balls with the help of 4 fours and two sixes. It was a dominant display from the duo, who propelled India to a strong total of 184 runs.

The bowlers too didn't disappoint and bowled extremely well in the death overs to restrict West Indies on 167/9 in 20 overs. While Harshal was the pick of the bowlers for his exceptional spell of 3/22 in his 4 overs, Shardul Thakur, Deepak Chahar and Venkatesh all picked up two wickets apiece.