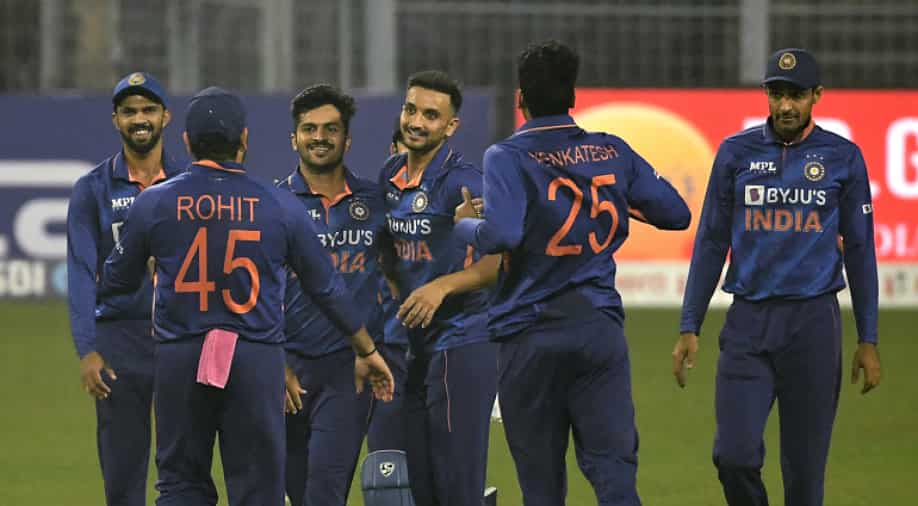 Harshal Patel and Suryakumar Yadav impressed as India defeated West Indies by 17 runs in the third and final T20I of the three-match series to register a 3-0 clean sweep.

Indian seamers fired in unison after Suryakumar Yadav's belligerent fifty as the hosts coasted to a series-sweeping 17-run win over the West Indies in the third and final T20I here on Sunday. After Deepak Chahar limped off the field after failing to complete the third over due to a hamstring injury, Harshal Patel (3/22), Venkatesh Iyer (2/23 from 2.1 overs) and Shardul Thakur (2/33) performed their tasks impressively to defend India's 184/5.

Wicket-keeper batter Nicholas Pooran continued his fine form slamming a third successive fifty (61 off 47 balls; 8x4, 1x6) but it was not enough as West Indies managed just 167 for nine. For Rohit, it was his third successive clean sweep as full-time skipper, having earlier defeated New Zealand (0-3) in T20Is and West Indies (0-3) in ODIs. The win also matched their 2020 record of nine successive victories on the trot.

For the West Indies, this was their third successive bilateral series defeats away from home -- 0-2 to New Zealand in 2020-21 and 0-3 to Pakistan 2021-22 -- as they capped a forgettable India sojourn losing six matches on the trot (including three in the ODI leg).

Though debutant pacer Avesh Khan (4-0-42-0) struggled with his line, Chahar made early inroads for India early on removing both the openers -- Kayle Mayers (6) and Shai Hope (8) -- in the space of 11 deliveries inside the powerplay.

Chahar swung the ball both ways and also smartly changed his pace to deceive the Windies openers and gave the first breakthrough in the fifth ball after India reviewed it successfully to dismiss Mayers.

In his next over, he took the outside edge of Hope with a peach of an outswinger and looked on fire before he sustained an injury and limped off the field without completing his over.

In absence of Chahar, Harshal stepped it up displaying his brilliant cricketing mind as he executed his slower ones to perfection to be the wrecker-in-chief.

Also Read: Break from bio-bubble a much-needed one for under-fire Virat Kohli

Earlier, Suryakumar Yadav unleashed his brute power on way to a 31-ball 65, and was well supported by all-rounder Venkatesh (35 not out off 19) as India posted a challenging 184 for five after being put in to bat.

Suryakumar smashed seven sixes and one boundary in an exceptional display of power-hitting before getting out for his career-best T20 score in the final delivery. Pace bowling all-rounder Venkatesh smashed four fours and two sixes at the other end as the duo put together 91 runs from 37 balls for the fourth wicket to help India recover from a mini middle-order collapse.

The rejigged Team India lost three wickets for 55 runs in the middle overs including that of skipper Rohit Sharma, who batted at number four, to be struggling at 98/4 in 15 overs.

Surya cruised to his fourth T20 fifty in just 27 balls with a massive inside-out six over covers off Romario Sheperd in the final over as India stepped up in style smashing 86 runs in the final five overs.

It was a new-look Indian batting order on display with Ishan Kishan opening the batting with Ruturaj Gaikwad, while Shreyas Iyer batted at No 3, and skipper Rohit dropped him down the order at No 4 in absence of Virat Kohli and Rishabh Pant who have been rested.

Having got a chance after making a debut in the Sri Lanka series in July last year, the Maharashtra 'run machine' Ruturaj impressed in his short stay at the crease and timed the ball to perfection before getting out while playing out of his comfort zone.

The most expensive buy at the IPL 2022 mega auction Ishan, who had two forgettable outings in the first two T20Is, started to fire against Shepherd with three boundaries in four balls in the fourth over.

Having put on a fifty-plus stand in just 32 balls, the duo of Shreyas and Ishan failed to convert their starts and got out in the space of seven balls.