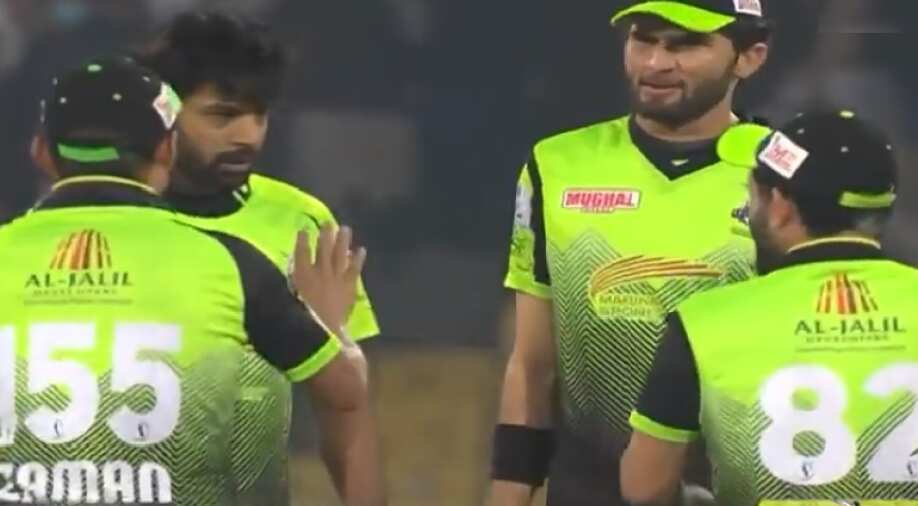 Pakistan pacer Haris Rauf was spotted slapping his Lahore Qalandars' teammate Kamran Ghulam for dropping a catch during their PSL clash against Peshawar Zalmi on Monday.

Pakistan pacer Haris Rauf lost his cool a bit and was spotted slapping his teammate Kamran Ghulam during his team Lahore Qalandars' clash against Peshawar Zalmi in the Pakistan Super League (PSL) 2022 on Monday (February 21). Emotions run high among players during matches and they often tend to lose their cool.

A similar episode was witnessed in the ongoing PSL 2022 on Tuesday. The incident took place during the second over of Peshawar Zalmi's innings when Rauf managed to dismiss opener Mohammad Haris on 6 off 5 balls. While celebrating with his teammates, Rauf was seen slapping Ghulam.

Rauf ended up slapping his teammate to remind him of the catch he had dropped earlier in the innings. Ghulam had dropped the catch of Zalmi opener  Hazratullah Zazai. Rauf finally managed to get a wicket in the same over after Zazai's opening partner Haris was caught by Fawad Ahmed.

The footage of Rauf slapping Ghulam instantly went viral on social media and became the talking point on social media. However, despite being slapped by Rauf, Ghulam was seen in good spirits and continued to celebrate with the rest of his teammates after Haris' dismissal.

Talking about the game, Peshawar Zalmi won the toss and opted to bat first in the game. Veteran Shoaib Malik's crucial knock of 32 along with contributions from Haider Ali (25) and Zazai (20) helped the team post a total of 158 runs on the board. Peshawar bowled well during Lahore's run-chase and came close to securing a comfortable win with 24 runs to defend in the final over.

Also Read: After exposing him on Twitter, Wriddhiman Saha unwilling to reveal name of journalist who threatened him

However, Lahore Qalandars skipper Shaheen Afridi produced a stunning display with the bat and ended up hitting three sixes in the final over to help his team tie the game. The match went into a Super Over where Peshawar restricted Lahore to 6 runs and won the game convincingly.