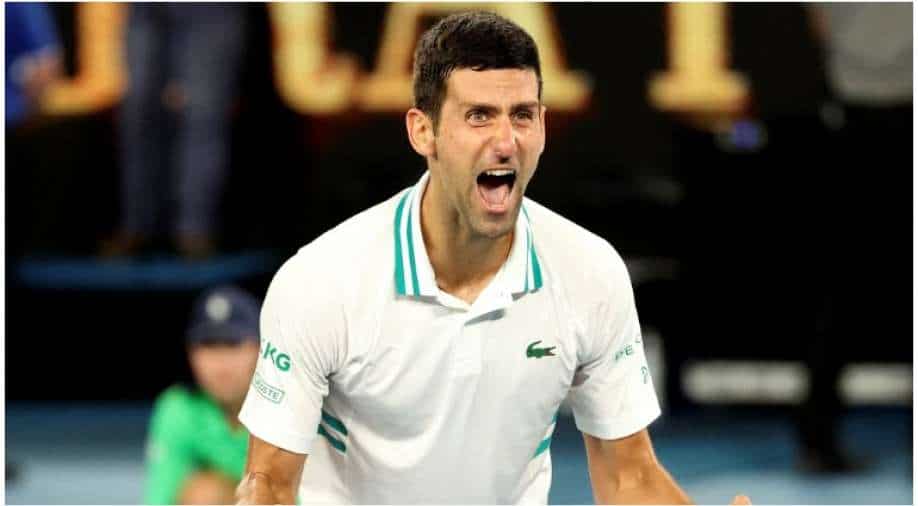 Novak Djokovic secured a Covid-19 vaccine exemption from Tennis Australia and the Australian government because he had tested positive for the virus in December, which should have qualified him for entry, the lawyers argued.

Djokovic secured a Covid-19 vaccine exemption from Tennis Australia and the Australian government because he had tested positive for the virus in December, which should have qualified him for entry, the lawyers argued.

"The date of the first positive Covid PCR test was recorded on 16 December 2021," his legal team said in a 32-page submission ahead of a federal court hearing Monday to appeal the visa decision.

Djokovic, who touched down in Melbourne on Wednesday night after a 25-hour trip via Dubai, had asked for a time to rest and consult his lawyers the following morning, his lawyers said.

But after a border official initially agreed, his superiors successfully pressured Djokovic to allow them to take an immediate decision on his visa, the lawyers said.

Foreigners are still mostly banned from travel to Australia, and those granted entry must be fully vaccinated or have a medical exemption.

The tennis star has been held since Thursday morning in a Melbourne detention centre "notwithstanding his requests to be moved" to another facility to train for the Australian Open, they added.

Although Djokovic has won a legal reprieve from deportation, it is unclear whether he will play in the January 17-30 tournament.

If successful, he will be gunning for a 10th Australian Open crown and a record 21st Grand Slam title -- a milestone that Spanish great Rafael Nadal is also chasing.

In an internal video leaked Saturday, Tennis Australia chief Craig Tiley said his organisation had done "everything they possibly could".

"There is a lot... of blaming going on but I can assure you our team has done an unbelievable job," he said in a video published by the Sunday Herald Sun newspaper.

A second tennis player who was headed to the tournament -- Czech doubles specialist Renata Voracova -- had her visa cancelled after initially being allowed into the country, her government has confirmed.

She was also placed in the Melbourne centre, and is widely believed to have left the facility on Saturday. AFP photo and video images showed a woman who appeared to be Voracova in a vehicle leaving the centre.

"They bring me food and there's a guard in the corridor... I feel a bit like in prison," 38-year-old Voracova told Czech media before her departure.

Djokovic, an outspoken vaccine sceptic, thanked fans for their support on Instagram.

"Thank you to people around the world for your continuous support. I can feel it and it is greatly appreciated," the 34-year-old nine-time Australian Open champion said.

More than 100 fans and anti-vaccine protesters, who were banging drums and chanting "Novak", rallied outside the Melbourne immigration holding facility on Saturday.

Read Also | Novak Djokovic's lawyers reveal he had COVID-19 a month ago, had received clearance to enter Australia

At an anti-vaccine rally attended by hundreds of people in another part of the city, some voiced support for Djokovic.

"Novak is making a stand and it's a worldwide opportunity for him to say something about vaccination status and how ridiculous it is."

As much of the country tightened restrictions to battle an Omicron-fuelled wave, the state of Victoria, where Melbourne is the capital, posted a daily record of 51,356 cases Saturday.

The centre holding Djokovic, previously the Park Hotel and officially known as an "alternative place of detention", houses about 32 migrants trapped in Australia's hardline immigration system -- some for years.

Detainees cannot leave the hotel and nobody is allowed in or out except staff.

The five-storey centre gained notoriety last year when a fire forced migrants to be evacuated, and maggots were allegedly found in the food.

Djokovic's family have said the hotel is "dirty".

Australian star Nick Kyrgios, who has feuded with Djokovic in the past, praised him in a news conference Saturday.

"You don't become a great champion like that without being able to overcome some adversity like this."

Read Also | 'Feel a bit like in prison': Amid Novak Djokovic row, another tennis player held over visa issues in Australia

"Djokovic is not a criminal, terrorist or illegal migrant, but was treated that way by the Australian authorities which causes an understandable indignation of his fans and citizens of Serbia," a foreign ministry statement said.

"Rules are rules and there are no special cases," he said.

Judge Anthony Kelly warned the star's lawyers in a hearing Thursday that justice would move at its own pace through all necessary appeals.

"The tail won't be wagging the dog here," he said.