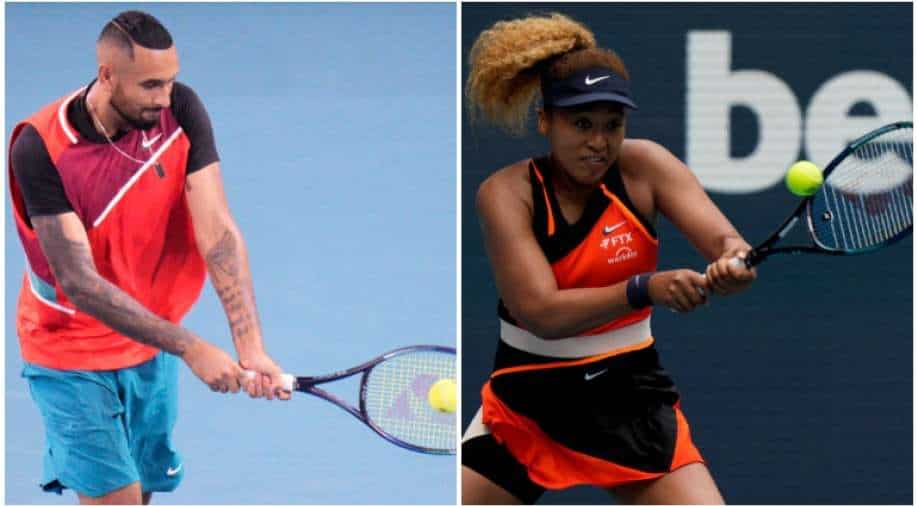 Australian Nick Kyrgios sealed a comfortable victory over Frenchman Adrian Mannarino in the first round of the Miami Open on Wednesday, while former world number one Naomi Osaka defeated Astra Sharma.

Australian Nick Kyrgios sealed a comfortable victory over Frenchman Adrian Mannarino in the first round of the Miami Open on Wednesday, while former world number one Naomi Osaka defeated Astra Sharma.

"It was a hell of a performance," Kyrgios said. "Getting on late, it wasn’t easy. So I'm really proud of myself with the way I responded. I felt good, I competed well today against a tough opponent."

The Australian said he would be a "complete underdog" in his second-round match against Russian fifth seed Andrey Rublev.

"But I feel confident. If I'm serving well and play well from the back, I can beat anyone," he added.

Earlier, Osaka was cheered on to a 6-3 6-4 win over Australia's Sharma.

Osaka was in complete command right from the moment she stepped onto the Hard Rock Stadium court, never allowing Sharma a single break opportunity while keeping her 96th-ranked opponent under constant pressure, converting two of 11 breakpoints.

After the match, Osaka soaked up the applause from the sparse crowd in what was a far different atmosphere from 11 days earlier in Indian Wells when she fought back tears after being heckled during a second-round loss to Veronika Kudermetova.

"This is like my home tournament," smiled Osaka during her on-court interview, prompting a round of cheers.

ALSO READ: 'A champion in every sense of the word': Tennis stars pay tribute to retiring World No 1 Ashleigh Barty

"Honestly I just didn't want to let anything bother me today no matter what happened, like the last match I played was not the greatest memory for me."

"I just wanted to prove I could come back out here and compete and no matter if I won or lost just know I had the best attitude that I could."

A four-times Grand Slam champion, Japan's Osaka has seen her ranking fall to 77th coming into the tournament after she took a break from tennis following last year's U.S. Open to prioritise her mental health.

Osaka's mental health struggles first manifested themselves at the 2021 French Open when she withdrew from the Grand Slam after deciding to boycott post-match media duties, explaining she had been suffering from depression.

She has taken breaks from the sport on several occasions and said after her match on Wednesday that she was seeing a therapist.

ALSO READ: Rafael Nadal out of action for six weeks with stress fracture ahead of French Open 2022

Osaka said the decision to finally seek out professional help came after her sister expressed concern for her.

"I finally started talking to a therapist after Indian Wells," said Osaka, after setting up a second-round clash with another former world number one Angelique Kerber. "It only took like a year after the French Open.

"I feel like I've been trying a lot of different things because I tend to internalise things, and I also want to do everything by myself."

"The mind is such a big thing. If you can get a professional to help you out .5%, that alone is worth it."