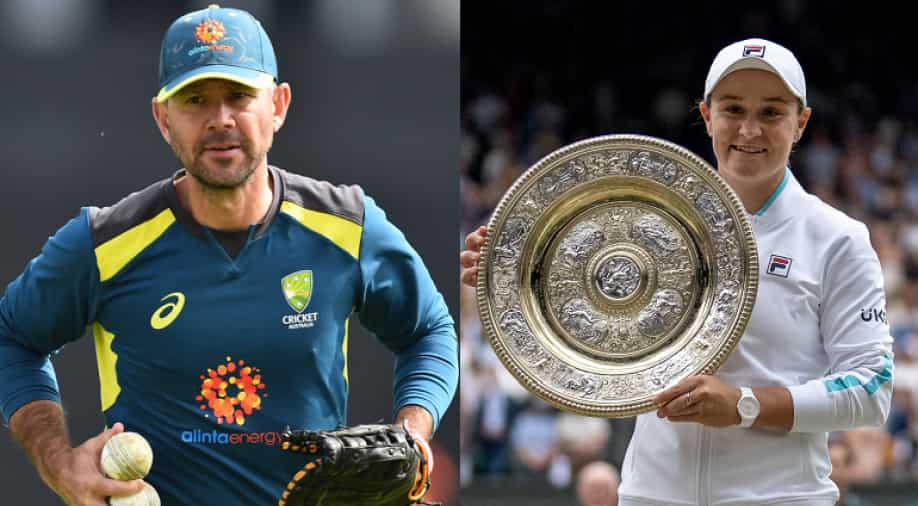 Australian tennis ace Ashleigh Barty left the tennis world stunned as she announced her shock retirement from the sport at the age of 25 on Wednesday (March 23).

Australian tennis superstar Ashleigh Barty left the entire sporting fraternity in shock as she announced her retirement from the sport at the age of 25. Barty, who became the first from the country to win the Australian Open after a gap of 44 years in January this year, has decided to hang up her boots just two months after her memorable triumph.

The world no.1 women's tennis star took to social media to share an emotional video confirming her retirement from the game. She said it is time for her to put the racquets down and chase other dreams as the 25-year-old reigning Australian Open champion gears up for new challenges in life.

Her unexpected decision to retire has left many stunned, including former Australian cricket team captain and two-time World Cup-winning skipper Ricky Ponting. The Australian cricket great is currently in India as the head coach of Delhi Capitals ahead of the new season of the Indian Premier League (IPL). Ponting said he woke up on Wednesday morning to the shocking news of Barty's retirement.

"I must admit, I was really shocked this morning. Someone who has reached on top of the mountain in their sport, you have been world number one, won the Wimbledon and won the Australian Open. Just 25-26 years of age and the world of tennis at her feet," Ponting said in an exclusive conversation with WION.

He then went on to laud Barty, who has retired from the sport as one of the best to have graced the court from Australia. Barty won 15 titles in her career, including three Grand Slams and spent 121 weeks on top of the women's rankings. She won the French Open in 2019 followed by the Wimbledon last year and the Australian Open in January this year.

"We have been so proud as Australians to finally have another Australian up there at the top of the world rankings and achieve some amazing things on the international stage," said Ponting.

Also Read: 'A champion in every sense of the word': Tennis stars pay tribute to retiring World No 1 Ashleigh Barty

This is not the first time Barty had decided to part ways with tennis. She had first shockingly announced her retirement from the game as a teenager in late 2014. She later made her comeback in 2016 and went on to become one of the best in the world at present.

Ponting recalled how Barty had decided to play cricket in the Big Bash League after retiring from tennis earlier and said she has always done things her own way. The former Aussie cricket team captain also wished her well in her retirement.

"She has decided to walk away but she has always done things her own way. That's the thing about her. It's not even the first time she has retired from tennis, she retired at the age of 18-19 as well and decided to play some Big Bash cricket for the Brisbane Heat," said Ponting.

"So whatever she chooses to do she will enjoy it and she would do very well. She is an extremely talented person and a great Australian. I wish her all the best in retirement," he added.