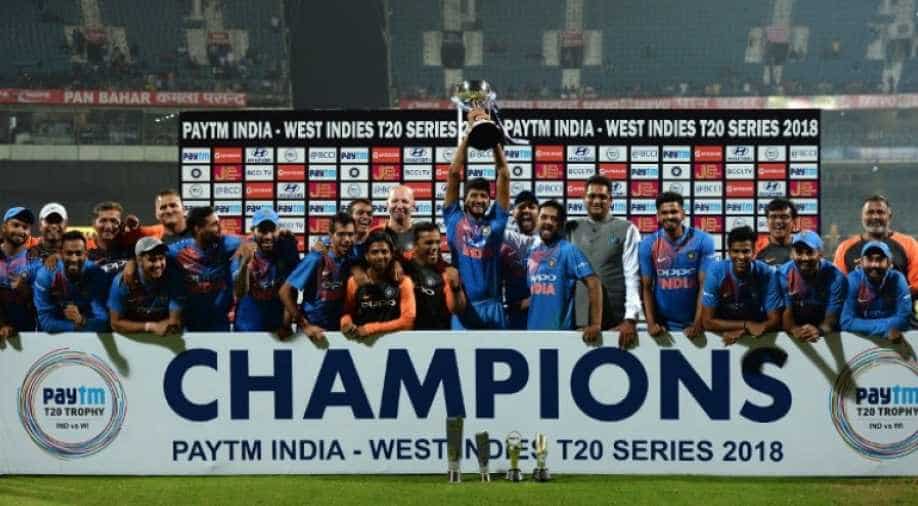 The result caps off a complete domination by India, who had won the Tests 2-0 and then the one-day international series 3-1 against the visiting West Indians.

Opener Shikhar Dhawan smashed 92 as India completed a six-wicket Twenty20 international win on the last ball against West Indies on Sunday to sweep the three-match series.

Dhawan put on a crucial 130-run third wicket stand with Rishabh Pant, who hit 58, to bring India close to their target of 182 before West Indies hit back in Chennai.

Pant was out in the 19th over and Dhawan lost his wicket on the penultimate ball of the match, but Manish Pandey hit the winning run to deny West Indies any chance of a consolation victory. A tie would have taken the match into a super over.

The result caps off a complete domination by India, who had won the Tests 2-0 and then the one-day international series 3-1 against the visiting West Indians.

Nicholas Pooran stood out with the bat for West Indies in the final game of a tough tour, with a 25-ball 53 that guided the visitors to 181-3 after electing to bat first.

But the left-handed pair of Dhawan and Pant put the hosts' chase on track after they had lost two early wickets including their in-form skipper Rohit Sharma for four.

India win a last-ball thriller, what a finish!

Somehow, needing seven off the last 11 became needing one off one, but they scrambled home. A pair of brilliant knocks from Shikhar Dhawan and Rishabh Pant proved just enough.#INDvWI SCORE 👇https://t.co/VsssOXxhh3 pic.twitter.com/KyOObkdIsx

Dhawan registered his first fifty of the series across formats as he batted with assurance, hitting 10 fours and two sixes during his 62-ball knock.

Pant, 21, complimented his senior partner with some lusty hitting in his 38-ball stay at the crease.

Earlier Pooran put on a key 87-run unbeaten stand with Darren Bravo, who made 43, to give the tourists a competitive total.

The left-handed Pooran, who was playing his fifth match, came in to bat with West Indies in a bit of trouble at 94-3 but took the attack to the opposition bowlers.

He hit four fours and fours sixes during his blitz, with Bravo at the other end playing a calculated 37-ball knock.

Shikhar Dhawan collects the Paytm Man of the Match award for his match winning knock of 92 💪👏#INDvWI pic.twitter.com/TQP7HxhAFP

Openers Shai Hope, who made 24, and Shimron Hetmyer, who hit 26, gave the West Indies a strong start with their 51-run partnership before Yuzvendra Chahal struck back for the hosts.

Chahal got Hope on his very first delivery and then cut short Hetmyer's brisk knock to check the opposition surge. The leg-spinner returned figures of 2-28.

India will now head to their all-important tour of Australia that begins November 21 with the first of the three T20 matches in Brisbane. The two sides will also play four Tests and three ODIs.