You can still see the smoke in the pictures: Kabul twin blasts witness recounts horror 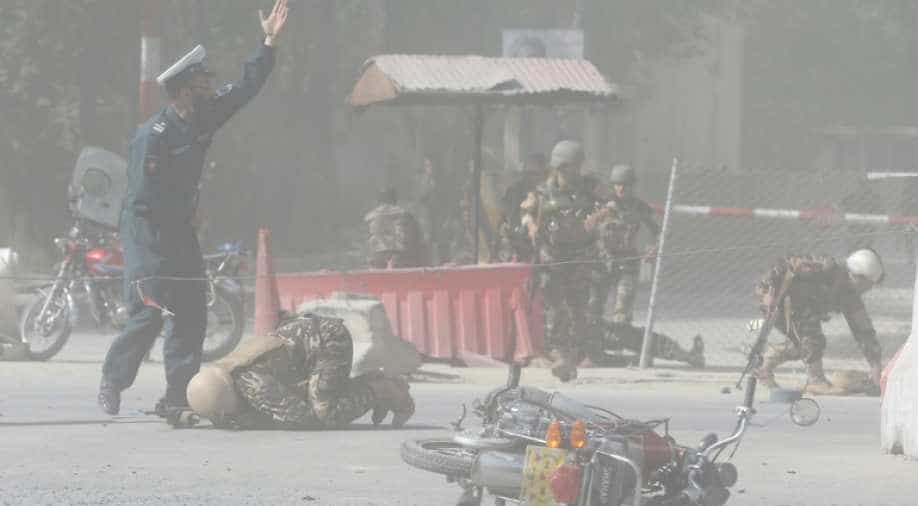 Afghan security forces are seen at the site of a second blast in Kabul, Afghanistan. Photograph:( Reuters )

The pictures show journalists killed in the second of two explosions that rocked Kabul during the morning rush hour. They were taken by Reuters photographer Omar Sobhani, 10 or 15 seconds after a suicide bomber, apparently targeting members of the media, detonated his explosives.

In one image, a cameraman from Al Jazeera can be seen kneeling wounded against the kerb, while nearby a journalist from Afghanistan's Radio Azadi is being helped by an old man who was passing by when the blast went off.

Sobhani, who began working for Reuters as a driver and fixer in 2002 and has been a photographer since 2007, was among the journalists who had raced to cover the initial explosion on Monday morning in the Shashdarak area of central Kabul, not far from the US embassy.

"Then we heard a huge bang just behind me. I survived because I was standing in front of a concrete pillar that shielded me from the force of the explosion, but I saw all my friends and colleagues on the ground and a lot of them were dead with a few wounded - you can still see the smoke from the explosion in the pictures."

Afghanistan's interior ministry said the suicide bomber who detonated the second blast had posed as a media worker, showing a press card to security forces and standing among the gathered journalists before blowing himself up.

Sobhani was slightly wounded but was able to quickly capture some images of the scene before withdrawing to seek help.

"I was shocked but I could see there was nothing to be done and I shot some pictures immediately before leaving," he said. "I could feel some pain and there was some shrapnel in my shoulder, which was taken out at the hospital."

Eight of the journalists were from Afghan outlets: two reporters from the Mashal TV, a cameraman and a reporter working for 1TV, three reporters from Radio Azadi and one from Tolo News, according to the Afghan Journalists Safety Committee.

For Sobhani and the other journalists at the scene, many of the victims of the attack were people they had worked alongside, covering the bloodshed in Afghanistan, for years.

"The people killed were all innocent people, people just going about their business or journalists just doing their job. They're showing the truth of what's happening, it's not politics, it's very important so that people can know what's happening," he said.

"It's a challenging job with a lot of problems, you see war and violence all the time, but it's important to make sure people know. I was very shocked, these were colleagues of mine, and one was a very good friend."