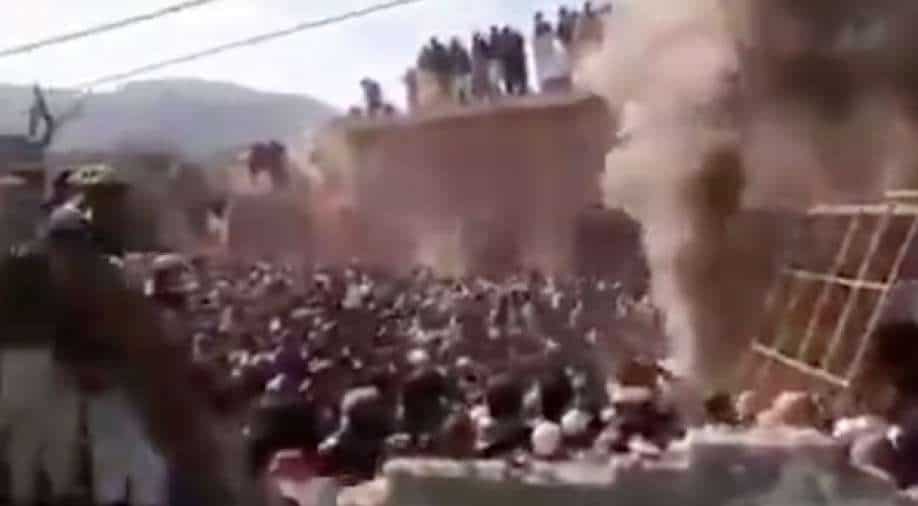 A still from video footage shows the attack on the Hindu temple in the village of Teri. Photograph:( Twitter )

"More than a thousand people led by some local elders of a religious party held a protest and demanded the removal of the Hindu place of worship," a local resident who witnessed the unfortunate incident said.

A violent mob led by a local Muslim cleric vandalized and set on fire a Hindu temple in Karak district of Khyber Pakhtunkhwa province.A video clip is going viral on social media, in which a violent mob is seen destroying the walls and roof of the temple.

The incident took place in Teri area of Karak district.

"More than a thousand people led by some local elders of a religious party held a protest and demanded the removal of the Hindu place of worship," a local resident who witnessed the unfortunate incident said.

"They gathered outside the shrine, gave speeches... they moved towards it and attacked it," he added.

The shrine built before 1920 was a historic place of worship.

A hindu temple was demolished by religious extremists in karak today. It is very shameful moment for us because it reflects the way of how we treat minorities in our country.
You can't run a federation unless and until the rights of minorities are protected. Strongly condemnable. pic.twitter.com/PJOKZA3a1l

The police kept standing as bystanders as the Mandir was burned down and demolished in Karak. These are views from inside the Mandir after it was attacked and vandalised. Highly shameful. What is the govt going to do about this? pic.twitter.com/0WlGpjjU3B

"The mob that was chanting slogans set the shrine on fire before demolishing it. An under-construction house owned by a member of the Hindu community was demolished," said another local resident of the area.

The locals also revealed that residents of the nearby villages had announced a protest demonstration with demands of removal of the Hindu shrine, adding that the police totally ignored it.

Disturbing visuals posted on social media showed a large number of protestors present at the site, bringing down the walls of the property with smoke and fire visible.

"The residents had issued a call for protest, but with an assurance that it would be a peaceful one. However, the cleric incited the crowd following which they proceeded to attack the shrine," said Irfanullah, District Police Officer Karak.

"The shrine keepers had secretly acquired a house next to the property. The protestors were against its construction because they assumed the shrine was being expanded," he added.

Irfanullah said there were no Hindus in the area.

"The mob destroyed the under-construction house due to which the shrine next to it also suffered damage collaterally," he said.

A First Information Report has been registered. However, no one has been arrested so far.

This is for the second time that the shrine has been attacked. It was demolished in 1997 and then rebuilt in 2015 as per the orders of the Supreme Court.

Pakistan`s Federal Minister for Human Rights Shireen Mazari condemned the incident, calling on the provincial government to ensure the culprits are brought to justice.

"Strongly condemn the burning of a Hindu temple by a mob in Karak, Khyber Pukhtunkhwa. KP government must ensure (the) culprits (are) brought to justice," she said.

"We as a government have a responsibility to ensure safety and security of all our citizens and their places of worship," she added.