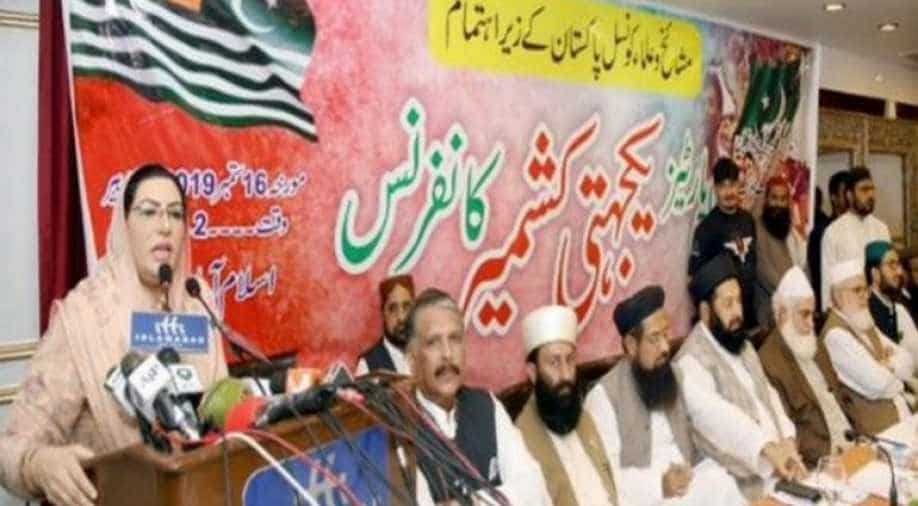 The photo, which was shared by, journalist Asif Shahzad, is from All Parties Kashmir Solidarity Conference which was held in Islamabad on September 16.

The photo, which was shared by, journalist Asif Shahzad, is from All Parties Kashmir Solidarity Conference which was held in Islamabad on September 16.

The conference was attended by President of Pakistan occupied Kashmir Masood Khan and Prime Minister's Special Assistant on Information and Broadcasting Firdous Ashiq Awan among other prominent leaders. However, the presence of Khalil, a PTI leader and founder of the terrorist organisation Harkat-ul-Mujahideen (HuM), in the event meant to garner support for Kashmir was questionable.

India has long blamed Pakistan for fuelling terror and supporting terrorist groups in Jammu and Kashmir to create unrest in the region.

Imran Khan's party, which rose to power with a promise to not provide safe haven to terrorists, has been often blamed for supporting terrorist groups. Khan has been infamous as Taliban Khan for his staunch support to the terrorist group.

Khalil's organization HuM is said to have been in direct contact with Osama Bin Laden and his family when he was in Abbottabad and has been on the US State department's foreign terrorist organization list since 1997.

Khalil has been a strong supporter of Imran Khan and advocated for the latter's candidature as the Prime Minister of the country last year.

In March, Khan's government received a lot of backlash for including Khahil into the party.

The photo has emerged weeks before the crucial Financial Action Task Force (FATF) meeting where Pakistan's compliance with the action plan will be assessed and it fears blacklisting.

Pakistan has been under the FATF radar for its complicity towards terror groups like Lashkar-e-Taiba (LeT) and Jaish-e-Mohammed (JeM) among others. In addition, terrorists like Hafiz Saeed are regularly seen ranting anti-India rhetoric and collecting so-called donations.

The FATF recently gave a stern message to Pakistan to expedite its action plan for curbing terror financing by October or face the prospect of getting blacklisted, which could aggravate problems for its stagnant economy.

Myanmar: At least 5 dead after military truck drives into protestors