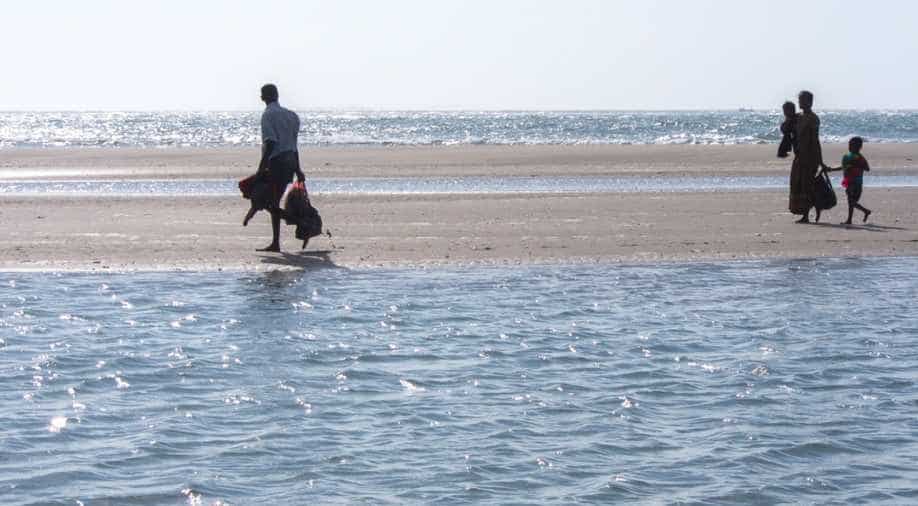 Tamil refugees crossing over to India from Sri Lanka. The Citizenship (Amendment) Bill, 2016 has left them out of consideration Photograph:(Others)
Follow Us

The Indian government has recently introduced the Citizenship (Amendment) Bill, 2016. The Bill proposes that illegal immigrants in India belonging to Hindu, Sikh, Buddhist, Jain, Parsi and Christian communities from Afghanistan, Bangladesh and Pakistan would be entitled to Indian citizenship after six years of residence even if they have no valid papers or passport.

Lawmakers have maintained that this move to grant Indian citizenship to the above categories of persons from neighbouring countries is based on ‘humanitarian grounds’.

The Bill, however, ends up raising more questions than it seeks to address, including raising doubts on the government’s actual humanitarian concern and also the impact of such a move.

First, the most notable criticism of the Bill is that in this entire scheme, Muslims are conspicuous by their absence. In short, Muslim migrants would not be entitled to the benefit of such a law if it were to be passed.

The Bill is seen by many as a consequence of the BJP’s election promise in 2014 to grant citizenship to Hindus from Muslim majority countries. During its campaign, BJP had declared India to be a natural home for persecuted Hindus and said that it has a responsibility towards Hindus who are harassed in other countries. However, it was not mentioned at that time that no such responsibility would be taken for Muslims who are faced with similar circumstances.

If the government was moved only by humanitarian concern towards victims of religious persecution and displacement, it could not afford to exclude approximately 36,000 Rohingya Muslims who were forced to flee Myanmar due to the 2015 insurgency and are currently living in different parts of India and praying for asylum ever since.

The Bill also conveniently overlooks the plight of Muslim sects like Shias and Ahmediyas who face persecution in Sunni-dominated Pakistan.

Second, even keeping the visible exclusion of Muslims aside, the claims about humanitarian concerns further seem inconsistent due to other reasons. Neighbouring Sri Lanka, where Tamils have faced a history of persecution has been excluded from the ambit, raising a question whether it was thought that such inclusion would be more suited to the interests of regional political parties, such as the AIADMK and the DMK than BJP. Also questionable is the move to exclude migrants from countries like China, prompting the critics to ask whether the government has decided to adopt a safer foreign policy of not wanting to openly label China as an aggressor or burning any further bridges with them.

Third, the Bill has been widely criticised on the ground that it fails to take into confidence or address concerns of indigenous people and their decades-long movement against illegal migrants. The prime case in point is Assam, which is already suffering from a high influx of migrants from Bangladesh. According to the Assam Accord, 1985, anyone entering India after 25th March, 1971, is an illegal citizen, irrespective of their religion.

The Bill has neither tried to assuage the apprehensions of all the stakeholders nor has it made adequate provisions to avoid conflict with the Assam Accord. This move of the government also comes at a time when, based on the Assam Accord and upon the intervention of the Supreme Court of India, the Government of Assam is updating the National Register for Citizens to include people permanently residing in the state till 24th March, 1971 and to only treat such persons as citizens of the country.

Several Assamese organisations are protesting against this Bill due to the fear of exodus of religious minorities from Bangladesh amid rising attacks on them by militants as it may further complicate the already vulnerable demographic of Assam.

Fourth, it is suggested by various quarters that even if the government decides to give shelter to victims of religious persecution from neighbouring countries on humanitarian ground, they should be only given ‘Refugee’ status as per international law and not that of a ‘Migrant’.

The Bill seems to confuse ‘Refugees’ with ‘Migrants’ and overlooks this important distinction by terming religious minority people as migrants, when they would in fact be refugees.

The Bill seems to confuse ‘Refugees’ with ‘Migrants’ and overlooks this important distinction by terming religious minority people as migrants, when they would in fact be refugees.

‘Migration’ means voluntary movement of people, usually for seeking better economic prospects. On the other hand, ‘refuge’ is an involuntary act of forced movement, compelled by preservation of human rights and safety and not to gain any economic advantage. Using the correct terminology in the Bill is important as the laws and policies, especially under international law for migrants and refugees are entirely different.

Shelter to individuals of a select religion, however, by excluding others defeats the intention and rationality of international refugee laws.

The Bill also plays foul with our own long-standing refugee policy. Even though India does not have a codified refugee policy, during the Tibetan refugee crisis, one of the main conditions was that refugees would have to return to their homeland once normalcy prevailed. In a direct contradiction, the proposed amendment not only provides citizenship rights to such refugees, but vastly relaxes the procedure to avail of such citizenship.

The Statement of Objects and Reasons of Bill maintains a studied silence on all the above issues. The Bill most importantly fails to explain why the Muslim community is being singled out in an apparent violation of Article 14 – Right to Equality – of the constitution. It was only after the Bill came under heavy criticism from opposition parties for being ‘biased’ against one specific religion that it was sent to a Joint Parliamentary Committee for further examination.

The unfortunate trend that emerges is that be it any party in power, the citizenship laws have always been used by ruling governments to appease and consolidate their own respective vote banks.

Earlier, the Congress government was forced to negotiate the Assam Accord, affecting primarily Muslims who, as a result stood debarred from obtaining Indian citizenship even after many years of residence. This in turn led to the electoral victory of Asom Gana Parishad.

In order to dilute the effect of the Assam Accord, the Congress enacted the Illegal Migrant (Determination by Tribunal) Act, 1983, which provided for the detection and expulsion of illegal immigrants from Assam – all of them Bangladeshi Muslims. However, in an exercise in appeasement, it was ensured that the procedure provided in the Act and the implementation thereof was such that the expulsions were virtually negligible.

While favouring one community for electoral gains is bad enough, excluding the community altogether is even worse and severely undermines the otherwise secular socio-legal framework of our nation. It is a move that violates the policy of pluralism and co-existence on which the Indian polity is based.

The Supreme Court of India has stated on more than one occasion that secularism forms the basic structure of our constitution and cannot be done away with. The Bill may tend to do just the opposite.

Also, such a selective law based purely on religious identities sends out the wrong message of hostile, unreceptive nationalism, which considers itself to be under siege from other communities.

Such a selective law based purely on religious identities sends out the wrong message of hostile, unreceptive nationalism, which considers itself to be under siege from other communities.

Therefore, the Bill may have a polarising effect and would further increase the trust deficit between the ruling government and the muslim community, something which a mature, participative and inclusive democracy can ill afford.

It is therefore hoped that the government would, rather than hastening with the Bill and taking a myopic view of things, agree to take into account the views of all those who are affected by the passage of the Bill and sufficiently answer their apprehensions.