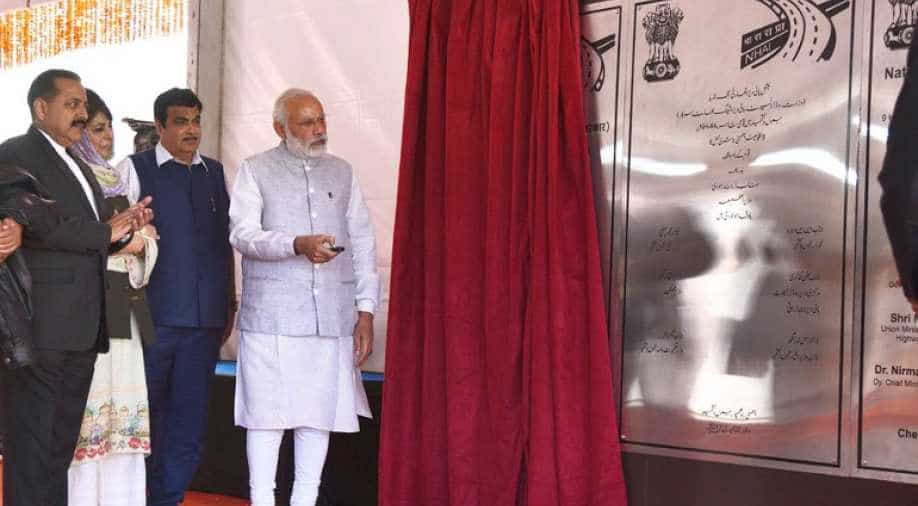 Mehbooba Mufti with Union minister Nitin Gadkari and Prime Minister Narendra Modi at the inauguration of the tunnel. Photograph:( Twitter )

Hailing Prime Minister Narendra Modi for the BJP's landslide victory in Uttar Pradesh and for the completion of longest tunnel of South Asia, Jammu and Kashmir Chief Minister Mehbooba Mufti on Sunday said that he supported her and her government during troubled times. She was referring to the violence that gripped the Valley after militant Burhan Wani was shot dead by security forces last year.

"We are thankful to our Prime Minister. The tunnel inaugurated will bridge distances, be it in travel or between people.

Congratulations to the Prime Minister for the mandate in Uttar Pradesh. Last year, during very troubled times you supported me and my government," Mehbooba Mufti said.

Asserting that the tunnel inaugurated will bridge distances, be it in travel or between people, the Jammu and Kashmir chief minister said that a lot has improved and a lot more needs to be done in Jammu and Kashmir."

"Mufti sahab had faith in the people and in Jamhuriyat," she added.

Prime Minister Modi on his part thanked the chief minister. He said that the Centre announced package for the state, adding the work has begun in this regard.

The Prime Minister earlier in the day inaugurated India`s longest tunnel Chenani-Nashri, on the Jammu-Srinagar highway amid high security.

The tunnel is expected to give sigh of relief to travellers on the Jammu-Srinagar national highway, as it will reduce the travel time on National Highway 44 between Jammu and Srinagar by about 2 hours by shortening the distance between the cities by 31 km.