Chennai oil spill: 60 out of 80 tonnes cleared from shores 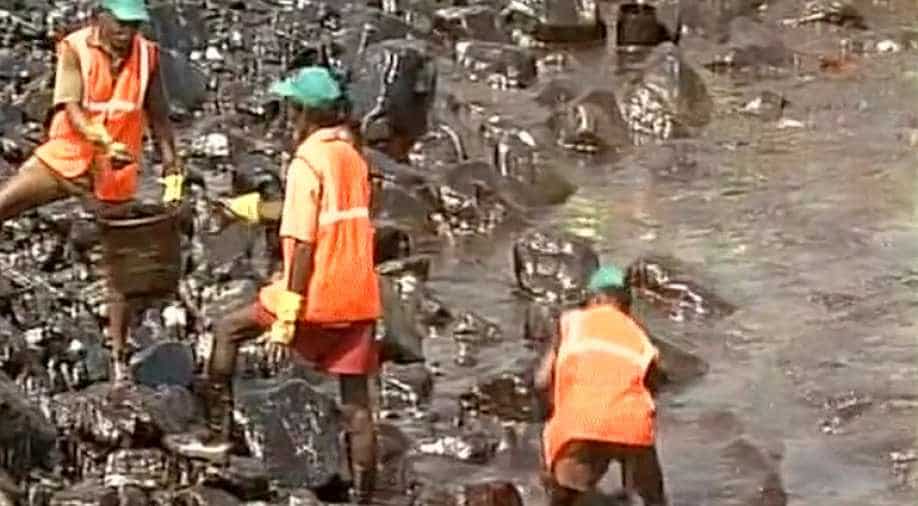 Indian Coast Guard personnel, fishermen and volunteers formed chains at the shore and used buckets to scoop out the thickening sludge Photograph:( ANI )

Operations to clear sludge after collision between two cargo ships near India's southern city Chennai led to an oil spill is expected to be complete by today (February 2) evening. The oil spill is believed to have occurred over a 30 km long coastline, media reports said.

#WATCH Chennai: Work to clear oil spilled after collision between 2 cargo ships off Ennore Port,continues;expected to be complete by evening pic.twitter.com/hNU0cKbA5L

"60 tonnes of oil have been collected, another 20 tonnes left in the area will be be removed soon," the state's fisheries minister D Jayakumar told ANI.

Indian Coast Guard personnel, fishermen and volunteers formed chains at the shore and used buckets to scoop out the thickening sludge after suction machines employed for the purpose reportedly proved futile as they pulled out more water.

The oil washed ashore at Ennore's Kamarajar Port and at Chennai's Marina and Elliots beaches after an LPG tanker collided with an oil tanker at the Kamarajar Port collided on January 28.

The collision took place at 2 am.

A senior port official told The Indian Express the leakage occurred much later, apparently to the long delay in controlling the situation. “We estimate that a crack on the fuel part was developed eventually and led to the leakage. We haven’t estimated the amount of oil spilled,” the official said on condition of anonymity.

A section of the sea water has blackened post the spill and half a dozen turtles have been found dead near the north Chennai shoreline, media reports said. Environmentalists have not been able to assess the entire impact of the oil spill so far.

An environmentalist, Vimlendu Jha, told Reuters a system needed to be put in place to prevent a repeat of such incidents in future.

"It has an impact on the marine biodiversity of the entire area. Right now, we have actually seen the entire Chennai coastline. There is a lot of sludge that is there. There is a lot of oil that has actually reached. There are almost 500 species of fish that we have in that entire area and that is going to get affected. So, it has in short term it affects the marine biodiversity and in the long term it also affects the food chain and livelihood of thousands of people who actually live around Chennai," said Jha, in New Delhi.

A robust national system for oil spill response is critical in as 75 percent of the country's oil imports are through the sea.