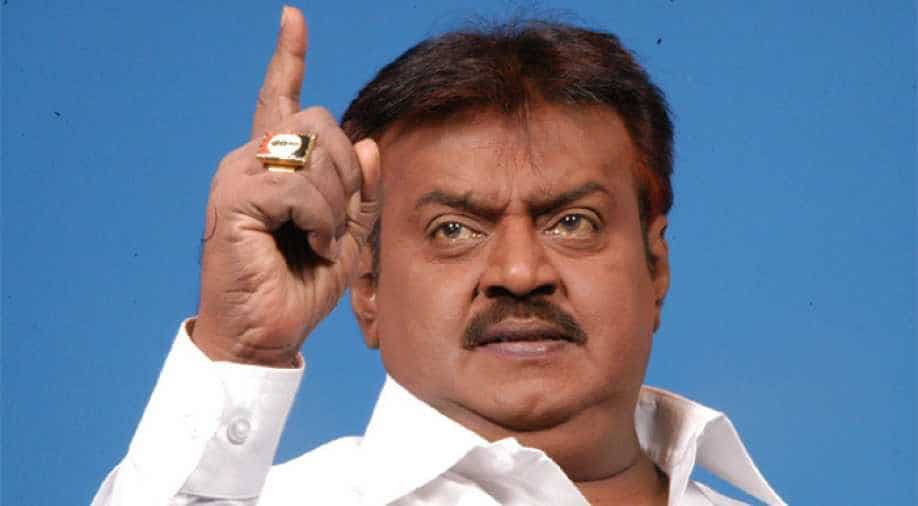 Popular actor-turned-politician Vijayakanth had started the DMDK in 2005 and since then the party has had a journey of ups and downs. Photograph:( Zee News Network )

Vijayakanth had left for the US on December 18th for treatment and will return in a complete state of wellness the statement added.

Captain Vijayakanth, leader of Tamil Nadu’s DMDK (Desiya Murpokku Dravidar Kazhagam), will return from the US on February 16, said a statement from his party.

Vijayakanth had left for the US on December 18 for treatment and will return in a complete state of wellness the statement added.

His return comes at a time when speculations are rife that the DMDK is in talks with the ruling AIADMK and the BJP in the run-up to the Lok Sabha polls. Tamil Nadu’s opposition party the DMK is expected to form an alliance with the Congress, Left parties, VCK and MDMK.

DMDK’s Deputy Secretary LK Sudhish, who is also Vijayakanth’s brother-in-law said to reporters that they were in talks with 2-3 parties and that an announcement regarding alliance could be expected by the end of February.

Popular actor Vijayakanth had started the DMDK in 2005 and since then the party has had a journey of ups and downs. When the party contested in the 2006 Tamil Nadu Assembly polls and won a single seat that was contested by Vijayakanth.

In the subsequent elections in 2011, his party allied with Jayalalithaa’s AIADMK and won 29 of the 41 seats that they contested. That was the peak of the DMDK’s electoral performance as the party later fell out with the AIADMK and some of their MLAs defected.

In the 2014 Lok Sabha polls the DMDK allied with the NDA, and failed to win any seat. In the 2016 Assembly Polls, Vijayakanth joined the People’s Welfare Front and yet again failed to win any seat. The questionremains if Vijayakanth, who is also known as 'Captain', can again make an impact and boost their cadre ahead of the Lok Sabha polls and thus help in scripting new innings for his party.