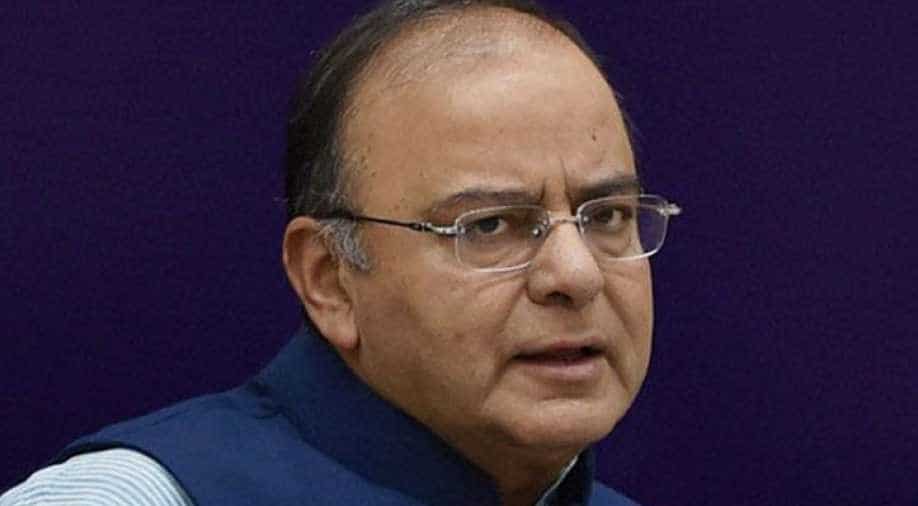 Arun Jaitley, who made the announcement, said he 'can`t recollect a single step that they (the Congress) took against black money'. Photograph:( Zee News Network )

"November 8 will complete one year of demonetisation. The party has decided to celebrate the day as anti-black money day," Union Finance Minister Arun Jaitley said, while addressing the media on Wednesday.

Jaitley further said that people who deposited money disproportionate to their income "are now being forced to pay taxes."

"Not the confiscation of money, but squeezing the quantum of cash was the objective of demonetisation," he added.

The finance minister also said that post the implementation of the Goods and Services Tax (GST), a new transition phase had been heralded in which would make cash generation difficult.

He added that the Congress had adequate opportunity while being in power, but he "can`t recollect a single step that they took against black money."

The Opposition parties had earlier decided to observe November 8 - the first anniversary of demonetisation - as "Black Day".

Leader of Opposition in the Rajya Sabha Ghulam Nabi Azad told the media here, "Possibly, this is the first time that a decision announced by the Prime Minister had to be changed 135 times. It just shows how ill-conceived it was."

Azad was speaking in the presence of Janata Dal (United) leader Sharad Yadav and Trinamool Congress leader Derek O'Brien, besides others.

He claimed that 18 parties would be protesting in their own respective ways in all states.

O`Brien described demonetisation as a "big scam" and added that TMC leader and West Bengal Chief Minister Mamata Banerjee was the first leader to point this out.

On Monday, the opposition formed a coordination committee and met for the first time in Parliament.

The meeting was attended by Azad, O'Brien, Yadav, CPI MP D. Raja, DMK MP Kanimozhi and BSP MP Satish Mishra.On November 8, 2016, the Centre announced to demonetise 500- and 1000-rupee banknotes.The government also introduced new Rs.200, Rs. 500 and Rs. 2000 notes.The government had then said that the action would curtail the shadow economy and crack down on the use of illicit and counterfeit cash to fund illegal activity and terrorism.