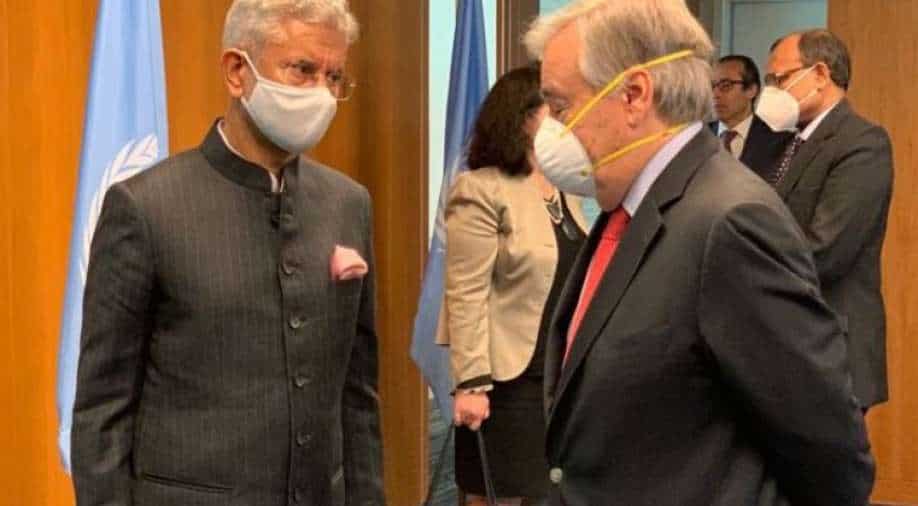 During the meeting, EAM conveyed to António Guterres that India will back him for his re-election for a second term as the UN Secretary-General.

During the talks at United Nations headquarters, the key focus was India's presidency of the council in the month of August during which India will be leading a number of events on maritime security, technology, and peacekeeping.

A tweet statement by EAM said that he, "highlighted India's constructive role in UNSC and conveyed priorities of our presidency in August."

During the same meet, UN SG lauded Indian UN Peacekeepers' role in Congo over the weekend in the aftermath of the volcanic eruption.

Indian Army personnel are part of the MONUSCO or United Nations Organization Mission in the Democratic Republic of the Congo and played a key role in safeguarding civilians and UN assets.

India is also working with the UN's Department of Peacekeeping Operations for the development of a mobile tech platform – UNITE AWARE will be launched during India's August presidency.

It will increase situational awareness and provides terrain-related information to peacekeepers, with India contributing $1.64 million towards the project.

During the meeting, EAM conveyed to António Guterres that India will back him for his re-election for a second term as the UN Secretary-General.

Elections will take place later this year to choose the tenth Secretary-General of the United Nations whose tenure will begin from January 1 next year.

The meeting expectedly saw a focus on the Covid crisis, with EAM appreciating the efforts of the Secretary-General to facilitate ‘Vaccines for All" and both sides discussing the need to ramp up global vaccine production through expanded supply chains.

There was a mention of the India South Africa proposal of Covid vaccine patent waiver, which has seen increased global support ever since US President Biden administration extended support for it.

Other key issues were climate change and two key regional issues - on Afghanistan and Myanmar.

On climate change, EAM apprised the Secretary-General on India’s efforts to meet its Paris commitments pointing out to its projects like the International Solar Alliance and Coalition for Disaster Resilient Infrastructure.

On Afghanistan, his statement said,"Shared our concerns about ensuring that the gains of the last two decades in Afghanistan are adequately protected."